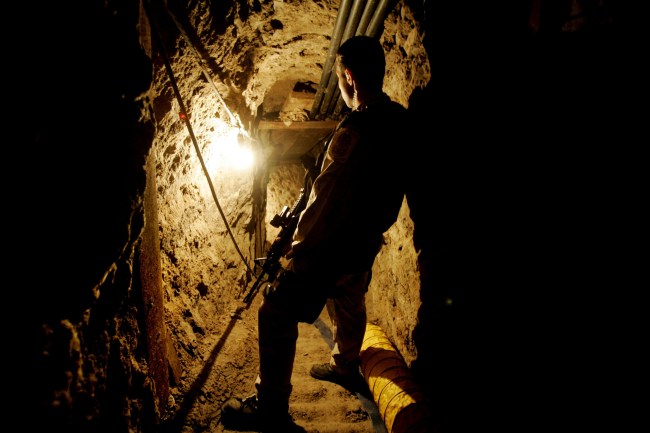 Authorities have discovered the longest drug-smuggling tunnel on the United States’ southern border. The elaborate tunnel stretched from Tijuana, Mexico, to San Diego.

U.S. Customs and Border Protection found a well-constructed tunnel that was buried at an average depth of 70-feet under the surface. The shaft is 5.5-feet high and 2-feet wide. The underground path was made for large-scale drug-smuggling, equipped with an elevator at the mouth, an extensive rail cart system, forced air ventilation, high voltage electrical cables, and a drainage system. There was an offshoot tunnel that was not completed.

The tunnel stretches from three-quarters of a mile from an industrial site in the northern Mexican city of Tijuana to San Diego, California. The end of the tunnel was buried under hundreds of sandbags in the Otay Mesa industrial warehouse area.

U.S. authorities on Wednesday announced the discovery of the longest smuggling tunnel ever found on the Southwest border, stretching more than three-quarters of a mile from an industrial site in Tijuana, Mexico, to the San Diego area. The tunnel is a total of 4,309 feet, beating out the previous longest tunnel on the US-Mexico border that was also found in San Diego, that one was 2,966 feet.

“This one blows past (the second-longest),” said Lance LeNoir, a Border Patrol operations supervisor. “We never really thought they had the moxie to go that far. They continue to surprise me.”

The tunnel was originally discovered in August, but U.S. officials did not announce the news of the drug-smuggling tube until Wednesday. No drugs were found inside the tunnel, and no arrests were made. U.S. and Mexican authorities did not speculate who built the tunnel and how long it has been there. Elon Musk could make a fortune selling his Boring Company equipment to the Mexican drug cartels.

Coincidentally, the tunnel was so deep that it was buried directly under the U.S. border wall with Mexico.

This is the 15th sophisticated tunnel that has been found at the U.S.-Mexico border since 2006.

These are photos inside what @CBP says is the longest drug tunnel ever discovered. Tunnel is nearly a mile long, it runs from Tijuana to Otay Mesa right under the border fence. Average depth inside is 70ft & has a rail system, electricity, ventilation & drainage system. pic.twitter.com/OcxbMGixhm

If we learned anything from Joaquin “El Chapo” Guzman, it’s that drug cartels love tunnels. In 2014, El Chapo escaped the Mexican military through a secret tunnel that was located in one of his safe houses. Guzman was in bed with one of his mistresses when Mexican authorities attempted to enter. The military had difficulty breaking down the steel-reinforced front door, which gave the naked El Chapo time to escape down a tunnel. The secret passageway was hidden underneath a bathtub in the home that had a hydraulic lift on it. The tunnels connected with six other of the drug lord’s homes.

El Chapo also used a tunnel to make one of his most daring prison escapes. On July 11, 2015, Guzmán escaped from the Federal Social Readaptation Center No. 1 maximum-security prison. The Sinaloa Cartel leader escaped through a nearly mile-long tunnel that had a motorcycle track inside.

Mexican drug lord El Chapo used a motorbike to zoom through a tunnel during his escape. http://t.co/vjRsQRI6Ku pic.twitter.com/c0Hrc5w7UM

RELATED: We Now Live In A World Where There Is El Chapo Beer