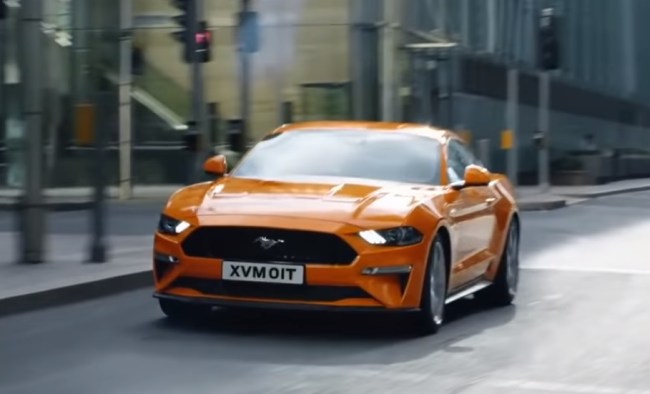 Find yourself a girl who will love you half as much as Great Britain loves banning things. The UK loves banning anything and everything from clapping, the words “fake news,” knives (even kitchen knives), plastic straws, cotton swabs, q-tips, ads with women in bikinis, and energy drinks sales to children. The British don’t like to ban things… THEY LOVE BANNING THINGS! The latest silly thing that the UK banned is this absolutely harmless ad for the Ford Mustang.

Britain’s Advertising Standards Authority, the country’s regulatory agency for ads, ruled on Wednesday that this Ford commercial for the Mustang needed to be banned after they received 12 “complaints.” Watch the entire video and see if you can spot the offensive footage.

This commercial was actually banned. Allegedly, this ad “encouraged unsafe driving.” Did anyone else miss the “unsafe driving” part?

If you couldn’t spot the “unsafe driving” you’re not alone because either did Ford of Europe, which revealed that the Mustang in the commercial never exceeded 15 mph during the ad.

The ad featured the “Do not go gentle into that good night” poem written by Welsh poet Dylan Thomas in 1947. The commercial focuses on how after having a shitty day at work you can have some sort of relief as you speed (at 15 mph) out of the work parking lot in your Stang.

But it wasn’t just the “unsafe driving” that caused the commercial from July 2018 to be banned months later. The ASA provided a laundry list of alleged issues with the car commercial in a statement on their site.

The ASA noted that the ads featured a scene showing a man going into a lift with a discontent expression whilst other office workers proceeded to go into the lift before him. The man then showed anxiety when the lift did not stop on the floor he had pressed the button for. In other scenes, a woman on a train had her foot stepped on and a man spilt coffee on his papers, to which they both displayed a look of shock and distress. In further scenes a woman was shown at her desk smiling when a colleague entered the room, but as soon as her in-tray was filled with more work, we noted that her facial expression changed to looking displeased. The ads then showed a scene showing a distressed man having difficulty operating a photocopier who was hastily tapping a button for it to work, and then used hand gestures to show his frustration with the matter.

We considered all those scenes depicted people in distressful circumstances, which led them to feel anger over their particular ordeal.

The Advertising Standards Authority were in a real forbidding mood this week because they also banned ads from Nissan “encouraging dangerous driving” and “driving at excessive speeds” as well as Fiat commercials that “encourages motorists to drive irresponsibly.” The Fun Police were out in force this week.

Imagine having such a miserable existence that you are not only bothered by an innocuous car commercial but then spend your free time sending a complaint to the government? Not to mention that there were 11 other curmudgeons out there to do the same process to get a car ad banned. Be thankful you live in the great U.S. of A where the government still somewhat treats you like a functioning adult able to make your own responsible decisions and isn’t entirely a nanny state.