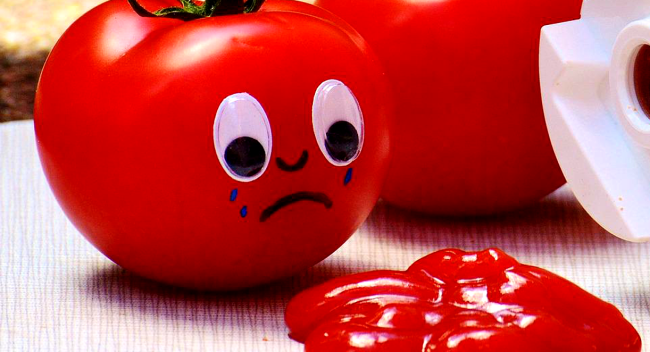 From the same people who brought us mustard ice cream back in 2019, French’s is back with another bizarre culinary concoction that’s setting the internet on fire.

Limited to just Canada, French’s will be doling out Frenchsicles for a limited time at pop ups in three different cities.

French’s says their unusual popsicles are made with 100% Canadian tomatoes in collaboration with Happy Pops, a Canadian business specializing in all-natural ice pops made from real fruit and sweetened with organic cane sugar.

“Perfectly savoury (like a Classic Ceasar) with a hint of salty sweetness, this homemade popsicle recipe highlights the delicious flavour of French’s® Tomato Ketchup – made with 100% Canadian tomatoes – in a unique and refreshing way!” the company states.

A refreshingly savoury & sweet ketchup popsicle, made from 100% Canadian tomatoes.

They will be giving out these Frenchsicles on June 22 in Vancouver, on June 23 in Toronto, and on June 24 in Leamington.

As an added incentive to go out and try one, for every Frenchsicle given away, French’s will donate two meals to Food Banks Canada.

However, if you don’t live near one of the three Frenchsicle giveaway locations, you can still make them at home using a handy recipe provided by French’s.

Why anyone would want to do such a thing is a mystery to many on the internet.

I love ketchup as much is the next person. But this is horrifying

WHAT ARE THEY DOING IN CANADA

Do you know the difference between knowledge and wisdom?

Knowledge is knowing tomato is a fruit.

Wisdom is knowing not to make ketchup popsicles out of them.

Honestly, it can’t be any worse than some of the other food items we’ve seen thrust on the people over the years like macaroni and cheese ice cream, a hot dog ice cream sandwich, and, gulp, clam chowder popsicles.

Amazingly, not everyone was completely repulsed by the idea of a ketchup-flavored popsicle.

Yum! When will this be available? I'm looking forward to it 😋😋

Thought of a lot of things in life that I thought would taste like crap, but then surprised....I reserve judgment till I lick this bastard..

I'm holding out for this one made into a popsicle. Perhaps rolled in French's fried onions. pic.twitter.com/gGm1It6wqh