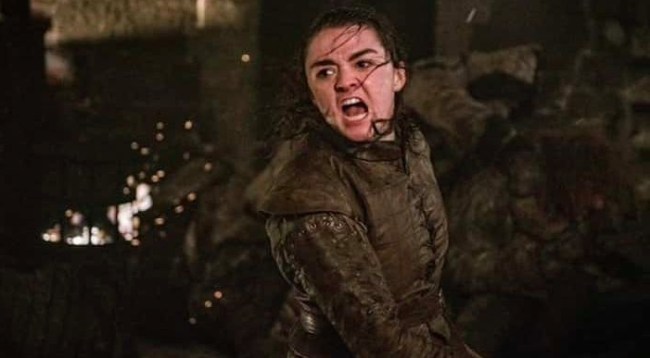 Did you go through Game of Thrones withdrawals on Sunday night? HBO attempted to gently ween us off Game of Thrones by airing a behind-the-scenes documentary. The HBO doc titled The Last Watch showed how Season 8 was made and the secrets to the final season. One of the secrets revealed was revealing how Arya Stark was able to kill the Night King.

The Last Watch showed the original cast script reading for Episode 3 of Season 8. They read through Ser Jorah Mormont’s final sacrifice for Daenerys Targaryen. The behind-the-scenes footage shows the moment that the cast learn that Arya Stark would kill the Night King. The cast are all smiles and clapping for Arya to be the hero of the Battle of Winterfell.

THE CAST FINDING OUT ARYA IS THE ONE WHO KILLS THE NIGHT KING & THEY ALL CHEER FOR HER!❄️👏🏼👌🏼 #GamefThrones #TheLastWatch pic.twitter.com/bIUDYC3Due

Especially Rory Mccann aka The Hound, who came off like a proud papa for Maisie Williams.

WHY IS NO ONE TALKING ABOUT THE HOUND/RORYS REACTION 😂 like his daughter just scored at her first football match 😂 #TheLastWatch
pic.twitter.com/6wWQ7nCCEs

The script also revealed how Arya was able to pull off that epic scene where she soared in like she had a jetpack and made the unlikely kill of the Night King. Apparently, Arya Stark was able to jump like Michael Jordan and kill the Night King because of dead bodies.

“The Night King walks with methodical, terrifying calm,” Game of Thrones producer Bryan Cogman reads from the script. “He stops before Bran and raises his sword to strike, but something is hurtling towards him out of the darkness. Arya. She vaults off a pile of dead wights, leaps at the Night King and she plunges the dagger through the Night King’s armor. The Night King shatters.”

There doesn’t seem to be any piles of wights in the scene. At the 1:33-mark showing when Theon Greyjoy was killed by the Night King, there isn’t a pile of dead wights anywhere near.

How high is a pile of dead wights? A foot? 3 feet? Unless there was pile of dead bodies like in World War Z, I am not buying this.

Also, how did Arya get around the tens of White Walkers surrounding the Night King?

This is the best that the Game of Thrones writers could come up with? A convenient pile of corpses that you never actually see? Game of Thrones showrunners David Benioff and D.B Weiss deserve the petition to have the final GoT season rewritten by capable writers and the petition to not have D&D ruin the upcoming Star Wars trilogy.

They used the last five seasons showing how hard Arya was training to be an assassin, not a long jumper. Why didn’t they have Arya use the face of a dead White Walker to get close to the Night King to assassinate him? Why not have Bran use his greensight to see the future and know exactly when the Night King would come for him? Then Bran AKA the Three-Eyed Raven could tell Arya to hide in the Weirwood tree and kill the Night King with a much more believable flying killshot? This is just another example of lazy writing from Season 8.