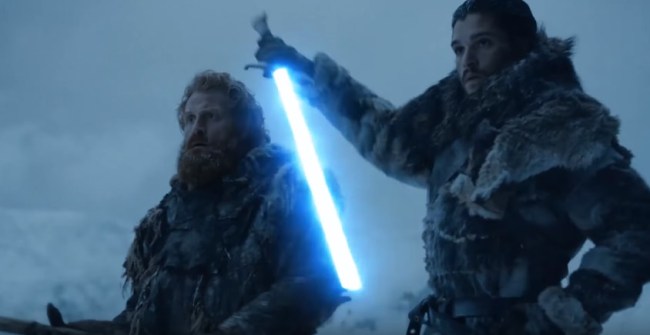 Everyone hated the final season of Game of Thrones. This is no longer a debate. Game of Thrones Episode 6 of Season 8 titled The Iron Throne was the lowest-rated episode in the history of HBO’s fantasy TV series. Not to mention the gigantic plot holes in Season 8 that were so huge you could drive a tank into them and all of the unanswered questions that remain after the GoT finale. Now Game of Thrones fans take their dissatisfaction and aim it the writers and their next project.

There was already a petition by Game of Thrones fans demanding that the final season be remade by competent writers. The petition on Change.org has over 1.5 million signatures. The efforts will probably fall on deaf ears over at HBO, so fans have a new target of their fury.

Game of Thrones showrunners David Benioff and D.B. Weiss were signed to a very lucrative contract to write the next Star Wars trilogy. Keep in mind that this was before the disastrous Season 8. The current trilogy ends with the movie The Rise of Skywalker, which arrives in theaters this Christmas season. Disney announced that the all-new trilogy will debut in December of 2022, and the second chapter arrives in 2024 and the final installment dropping in 2026.

Following the disaster that was the final Game of Thrones season, fans don’t want Benioff and Weiss ruining another beloved franchise. A new Change.org petition titled Keep Game of Thrones writers away from Star Wars intends to stop the writers from screwing up Star Wars.

The latest petition against the Game of Thrones showrunners has nearly hit their goal of 15,000 signatures and urges fellow Star Wars fans:

Putting the Game of Thrones writers (David Benioff and D.B. Weiss) in charge of Star Wars is not only a controversial decision but a mistake, plain and simple. This whole season of the HBO show, which wraps up next week, has tested fans with unpopular, illogical, immersion breaking plot twists and character developments. Seeing how these writers handled the most popular TV Show of a generation and seeing how the fans are reacting to it should not be rewarded with giving them the most popular movie franchise in the world!

The petition states: “There are plenty of talented writers and producers loyal to the franchise that would make much better work in the Star Wars universe.”

To leave you on a positive note, here are the best Game of Thrones sword fighter with characters wielding lightsabers from Star Wars in battle, which will be a better piece of cinematography than Season 8 of GoT and whatever new Star Wars movie gets vomited out.