Is This ‘Game Of Thrones’ Fan Theory About Tyrion Confirmed By The Actress Who Plays Cersei Lannister? 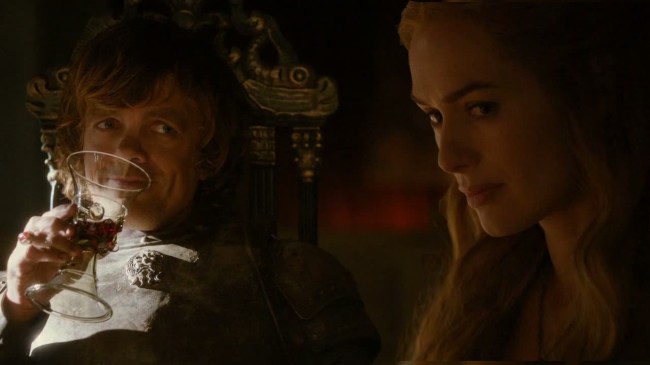 There is a Game of Thrones fan theory that has been swirling around for some time now, but it is gaining steam as many point to an Instagram post by the actress who plays Cersei Lannister. This theory revolves around Tyrion Lannister and questions regarding his lineage that could have major ramifications in the final season of Game of Thrones.

Over the summer, Lena Headey, the actress who plays Cersei Lannister, posted a photo of her Game of Thrones brothers — Tyrion and Jaime Lannister. Headey is licking the face of Tyrion, played by actor Peter Dinklage, as Nikolaj Coster-Waldau hugs them both from behind. Certainly the Lannisters in true form. Headey, who is congratulating her co-stars on 2018 Emmy nominations, captioned the photo: “Now this is more like it. Congratulations to my brothers (literally) from other mothers. I’m a lucky lucky sista to these Mistas. Love you PD and @nikolajwilliamcw.”

Now this is more like it. Congratulations to my brothers (literally) from other mothers. I’m a lucky lucky sista to these Mistas. Love you PD and @nikolajwilliamcw 💗💗💗💗

Many are pointing out the wording in the caption, specifically “brothers from other mothers.” Fans theorize that this is a slip of the tongue, a hint, or a huge spoiler for Season 8 of Game of Thrones. Game of Thrones enthusiasts contend that this Instagram post validates the theory that Tyrion Lannister is not a Lannister, but he is a Targaryen.

RELATED: Game Of Thrones’ Fan Theory Says The Most Unlikely Hero Will Slay The Night King And There Were Clues In Season 1

As the fan theory goes, it was rumored in George R.R. Martin’s A Song of Ice and Fire books that the Mad King Aerys Targaryen fancied Tywin Lannister’s wife Joanna. The Mad King helped himself to Tywin’s wife during the bedding ceremony at their wedding as mad kings tend to do. Aerys made Joanna his mistress because he wanted to or because he wanted to assert dominance over Tywin, who was his Hand of the King or probably both.

Ser Barristan Selmy, a knight from House Selmy and the Lord Commander of the Kingsguard of Robert I Baratheon, told Daenerys Targaryen this story about her father Aerys lusting after Joanna.

“Prince Aerys … as a youth, he was taken with a certain lady of Casterly Rock, a cousin of Tywin Lannister. When she and Tywin wed, your father drank too much wine at the wedding feast and was heard to say that it was a great pity that the lord’s right to the first night had been abolished. A drunken jape, no more, but Tywin Lannister was not a man to forget such words, or the … the liberties your father took during the bedding.”

There are theories that Tyrion’s dwarfism could be the result of a failed abortion, possibly by way of a deadly potion meant to kill the baby. Tyrion’s birth kills Joanna and that could be one of the many reasons why Tywin abhors the little guy. Tywin disowns Tyrion and treats him atrociously, even sending him into dangerous battles possibly with intentions of him being killed.

In the books, Tyrion’s appearance is “silvery” blonde hair that was “so blonde it looked white,” which sounds an awful lot like a Targaryen. Tyrion also has one black eye and one green eye, which in the Game of Thrones world is only mentioned in one other character… the bastard daughter of King Aegon IV Targaryen.

Tyrion dreams of owning a dragon. “Sad isn’t it? When I was your age, I used to dream of having a dragon of my own. Even a stunted, twisted, ugly little boy can look down over the world when he seated on a dragon’s back,” Tyrion said. Only Targaryens have dreams about dragons. In Season 6, the tiny Tyrion is fearless going into the lair of two hulking dragons and even develops some sort of a connection with Viserion and Rhaegal.

Tywin questions whether Tyrion is even his son.

You, who killed your mother to come into the world? You are an ill-made, spiteful little creature full of envy, lust, and low cunning. Men’s laws give you the right to bear my name and display my colors since I cannot prove that you are not mine. And to teach me humility, the gods have condemned me to watch you waddle about wearing that proud lion that was my father’s sigil and his father’s before him. But neither gods nor men will ever compel me to let you turn Casterly Rock into your whorehouse. Go, now. Speak no more of your rights to Casterly Rock. Go. Oh, one more thing. The next whore I catch in your bed I’ll hang.

Then there is the final scene between Tywin and Tyrion when the Lannister father is on the can. With Tyrion pointing a loaded crossbow right at Tywin’s face, he tells his son, “You’re no son of mine.” Tyrion tells his father, “All my life you’ve wanted me dead.”

The Kingsguard are the royal bodyguards of the Iron Throne. While they are prestigious, they are prohibited from owning land, taking a wife, or fathering children. That is the exact reason that the Mad King anointed Jaime Lannister as a member of the Kingsguard. Aerys took away Jaime’s chance at inheriting Casterly Rock, but opened the door to Tywin’s other son, Tyrion, to becoming the next in line. Could he have made that move to ensure that his son, Tyrion, gained control of Casterly Rock and the Lannister fortune once Tywin died? That’s some 4-D chess right there.

Another hint that Tyrion is a Targaryen is that he shares an uncomfortable reality with Jon Snow and Daenerys Targaryen, in that all of their mothers died during their childbirths.

So why doesn’t Tywin just kill Tyrion and be done with it? Tywin adored Joanna and even smiled at their wedding, something Tywin never does. He may have made a promise to Joanna on her deathbed to watch over the boy that took her life. Not to mention if Tywin murdered the child, it could get out that the Mad King cuckholded him and that’s why he killed Tyrion.

If Tyrion is the bastard child from the illegitimate affair between a Targaryen and Lannister, that would make his name Tyrion Rivers because that is the name for Targaryen bastards as “Snow” is the name for Stark bastards. So could Jon Snow, Daenerys and Tyrion all find out that they are all Targaryens in the final season of Game of Thrones? This would make sense for the prophecy of the three dragons and the three-headed dragon sigil of House Targaryen.