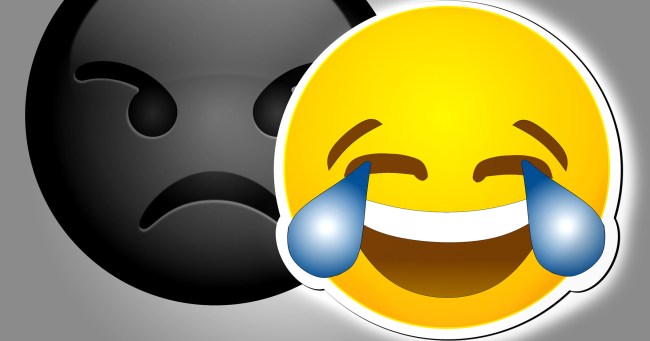 It’s the argument that’s got members of Gen Z fighting with Millennials: is the laughing crying emoji still cool to use?

No joke, this is a thing.

No less of a news organization than CNN says it is.

In recent weeks, two internet-savvy generations have been clashing in videos and comments on TikTok over the hallmarks of millennial culture that are now deemed uncool by Gen Z. The list includes skinny jeans (Gen Z verdict: set them on fire), side parts (Gen Z verdict: middle part or bust) and perhaps most painful of all, the popular laughing crying emoji that some millennials, myself included, use hundreds of times a day, or more.

So, what’s wrong with the laughing crying emoji? Officially known as “Face with Tears of Joy.”

“I use everything but the laughing emoji,” 21-year-old Walid Mohammed told CNN Business. “I stopped using it a while back because I saw older people using it, like my mom, my older siblings and just older people in general.”

Apparently, rather than using any of the laughing emojis, members of Gen Z are now going with the 💀 emoji. As in, “I’m dead.”

You can still use the “Loudly Crying Face” 😭 emoji as another alternative.

Just keep that “Rolling on the Floor Laughing” emoji holstered because it too is no good.

Turns out that there are smart people out there actually studying issues like this.

“Tears of Joy was a victim of its own success,” is something Gretchen McCulloch, author of Because Internet: Understanding the New Rules of Language, actually said.

“If you indicate digital laughter for years and years in the same way, it starts to feel insincere. … The hyperbole gets worn out through continued use.”

That being said, Emojipedia also wrote, “It’s common wisdom on TikTok that the laughing crying emoji is for boomers.”

Gen Zers, born after 1996, are the first generation with practically no first-hand knowledge of the pre-internet age. As a result, the way they use the internet, social media, and, yes, emojis, is completely different for them, and often involves assigning their own meanings to emoji, which then spreads to others in their age bracket.

Basically, it’s the same as it’s always been. Each generation has its own slang that older generations struggle to understand. Only now, in the age of widespread internet and social media immersion, it’s also happening with emojis.

Of course, in 20 years, just like with about everything else, that generation will once again think that the laughing crying emoji is cool again, because that’s just how it works.

But seriously, don’t bring up side parts.