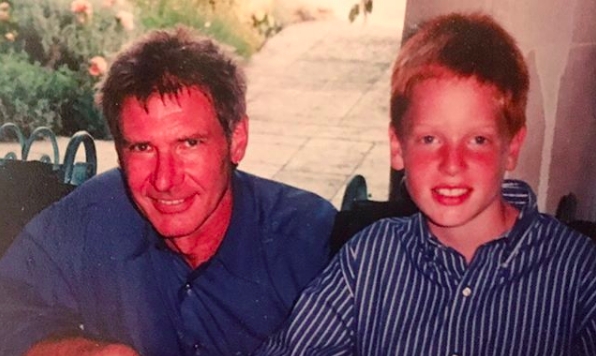 Happy 78th birthday to my pal Harrison Ford. It seems like only yesterday that we were drinking tea and eating scones on the back patio of the King and Queen of Jordan’s estate in Ascot, England. I recognize the absurdity of that sentence, but it came into being by more natural causes than you might think.

I wrote about it at my last job but the long and short of it is that my mom was roommates in college with Lisa Halaby, who later married King Hussein of Jordan, making her the Queen. She’s also my sister’s godmother, but most people know her more for the crown/world leader thing. Still, every year on my sister’s birthday, a package would arrive at the house with some insane gift in it. One year it was a life-size stuffed grizzly bear from FAO Schwartz. I’m talking life-size for a living grizzly. It was too big for the rooms in our house. I think my sister had to play with it outdoors. A few years later, she received a $500 gift certificate to J Crew. FIVE HUNDRED DOLLARS. Meanwhile, I was getting $25 CHECKS from my grandparents for my birthday. Really takes the steam out of that cash infusion when your sister is seeing a 20x multiple to her favorite store.

Then it was Steuben glass animal paperweights. Stuff like this.

Ho hum, $825 for a dolphin that can’t even swim. At least it helped my sister prevent her autobiography manuscript from sailing away on the wind like that Colin Firth scene in Love, Actually. After all, my sister just loved to type outdoors, the narcissism to write an autobiography at 14 notwithstanding.

Point is, that connection to Queen Noor (as she was renamed by her husband, the KING) was what saw our family invited to their 25th wedding anniversary at their massive estate in Ascot, famous for its horse races. Think Saratoga, NY meets Greenwich, CT, except wealthier and with more pageantry. I was nine, so I was too young to be invited to the big party, but my sister—eleven—just made the cut. I was furious, but what could I do? That Little Rascals scheme of putting on a trench coat and sitting on the shoulders of a burlier friend required… a friend. And I was alone. I stayed at the hotel with a babysitter and ordered shitty room service, fuming until the rest of my family returned late that night.

But the next day, we went back to their home for tea. It was a quiet affair; only a handful of the Queen’s closest friends were there. I went in the pool with her daughter, princess Iman. Developed a crush that would last a year. Tried to show it by splashing water in her eyes. Totally backfired. She would later be named to the Forbes “20 Hottest Young Royals” list. I was named “Most Outspoken” in my high school yearbook.

At the tea table, I was growing extremely bored when a helicopter landed in the garden some fifty yards away. Out stepped the King and… Harrison Ford. Han-fuck me-Solo. I swear to God, Indiana Jones was joyriding—nay, joypiloting—a helicopter with his pal, King Hussein of Jordan. They joined us at the table and my mouth went so dry I could barely speak. I’d never met a celebrity before, let alone my hero. Fortunately, I was at a young enough age that he wanted to be nice to me because that’s a good look for famous people. I asked him some dumb question about the blimp scene from The Last Crusade. I also asked him what his favorite movie was that he’d done, and he said Raiders of the Lost Ark. Then we planted a tree together in the gardens, with the King and everyone else, to commemorate their 25 years of marriage.

Finally, Harrison wrote me a note that said “To Francis, may the force be with you. Harrison Ford.”

It was the best day of my life until I met Michael Vick.