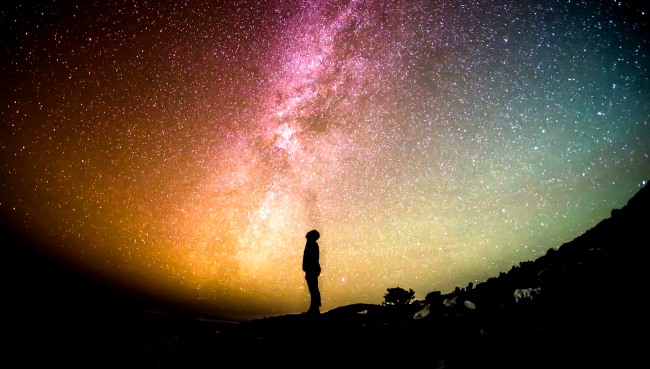 Avi Loeb, the former chairman of the astronomy department at Harvard University, is very well known in the scientific community for his outside-the-box (to put it lightly) thinking.

The decorated astronomer and theoretical physicist has in the past stated, among many things, that alien tech visited Earth in 2017, that there could be as many as a quadrillion alien spacecrafts traveling in our solar system, and that artificial intelligence will be the key to communicating with aliens, is now suggesting that our universe may have been created in a lab by aliens.

In an op-ed published in Scientific American this week, Avi Loeb posits, “Now there are a variety of conjectures in the scientific literature for our cosmic origins … A less explored possibility is that our universe was created in the laboratory of an advanced technological civilization. Since our universe has a flat geometry with a zero net energy, an advanced civilization could have developed a technology that created a baby universe out of nothing through quantum tunneling.

“This possible origin story unifies the religious notion of a creator with the secular notion of quantum gravity. We do not possess a predictive theory that combines the two pillars of modern physics: quantum mechanics and gravity. But a more advanced civilization might have accomplished this feat and mastered the technology of creating baby universes. If that happened, then not only could it account for the origin of our universe but it would also suggest that a universe like our own — which in this picture hosts an advanced technological civilization that gives birth to a new flat universe — is like a biological system that maintains the longevity of its genetic material through multiple generations.”

Got all that? Buckle in, there’s more.

Avi Loeb also suggests that because we do not have the ability to reproduce the astrophysical conditions that led to our existence “we are a low-level technological civilization, graded class C on the cosmic scale.”

We would be higher on the scale, says Loeb, if we possessed the ability to recreate the habitable conditions on our planet for when the sun will die.

In fact, because of our deficiencies, he says “we may be labeled class D since we are carelessly destroying the natural habitat on Earth through climate change, driven by our technologies.”

“A class B civilization could adjust the conditions in its immediate environment to be independent of its host star. A civilization ranked class A could recreate the cosmic conditions that gave rise to its existence, namely produce a baby universe in a laboratory.”

Loeb concludes, “The possibility that our civilization is not a particularly smart one should not take us by surprise. When I tell students at Harvard University that half of them are below the median of their class, they get upset. The stubborn reality might well be that we are statistically at the center of the bell-shaped probability distribution of our class of intelligent life-forms in the cosmos, even when taking into account our celebrated discovery of the Higgs boson by the Large Hadron Collider.

“We must allow ourselves to look humbly through new telescopes, as envisioned by the recently announced Galileo Project, and search for smarter kids on our cosmic block. Otherwise, our ego trip may not end well, similarly to the experience of the dinosaurs, which dominated Earth until an object from space tarnished their illusion.”

If he’s right and our universe was created in a lab by aliens then there are numerous other questions that need to be answered, such as, are our creators able to manipulate us and/or control our destinies? Or are we just part of some high-tech simulation as multiple scientists have hypothesized?