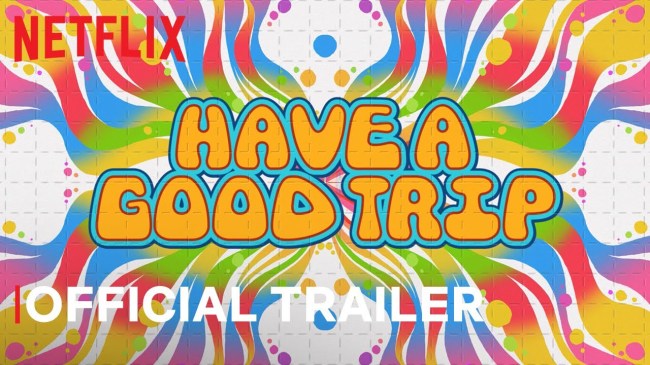 The next Netflix documentary we can’t wait to devour? Have a Good Trip: Adventures in Psychedelics, out May 11th on Netflix, featuring Nick Offerman, Adam Scott, Sting, A$AP Rocky, Sarah Silverman and lots of colorful, liquid Day-Glo animation.

It appears to compliment Netflix’s other trippy animated series, Duncan Trussell’s The Midnight Gospel, quite nicely.

Psychedelics are on the tip of the culture’s tongue at the moment. LSD, DMT, and mushroom trips are discussed with a good bit of frequency on episodes of the The Joe Rogan Experience, to an audience of millions.  New scientific studies seem to emerge almost weekly about the mental health benefits of psychedelics – particularly for dealing with trauma, depression, and anxiety. Organizations like MAPS are being established, dedicated to “evidence-based treatments for mental health conditions” via the use of psychedelics.

The new Netflix documentary digs into the complicated history of psychedelics to the present, from ancient uses to the Timothy Leary counterculture-era of “turn on, tune in, drop out.”

There’s lot of focus on anecdotal stories of tripping. For example:

Adam Scott appears to host a PSA about mind-altering substances. All the while, Nick Offerman is the scientific sherpa explaining the complicated neurological chemistry that goes into a trip down the rabbit hole: 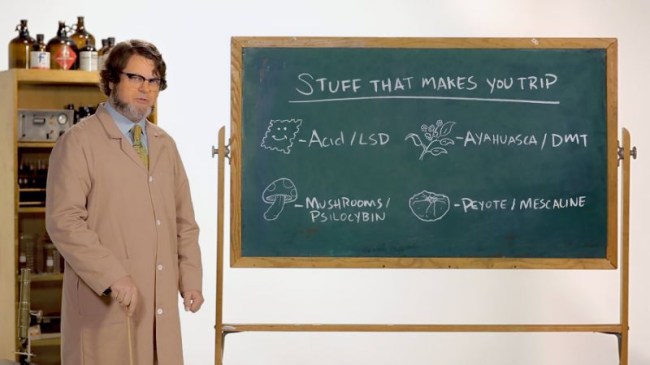 Here’s the synopsis, straight from Netflix:

HAVE A GOOD TRIP: ADVENTURES IN PSYCHEDELICS is a documentary featuring real-life tripping stories from A-list actors, comedians, and musicians. Star-studded reenactments and surreal animations bring their comedic hallucinations to life. The film explores the pros, cons, history, future, science, pop cultural impact, and cosmic possibilities of hallucinogens. The film also acts as an unofficial user’s guide for these consciousness altering compounds, and helps dispel the scare myths of the After School Special era. The film tackles some big questions: Can psychedelics have a role in treating mental health? Do they make us jump out of windows? Is love really all we need? Can trees talk?

The poster looks like a proper Bill Graham / Grateful Dead show poster from the 60s/70s.

HAVE A GOOD TRIP – Adventures in Psychedelics

Here’s the trailer. Arrives on May 11th: