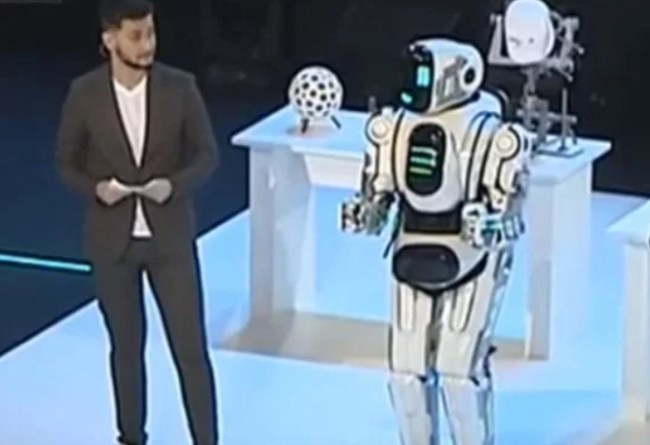 A lot of people will tell you how advanced and powerful Russia is. Russia is the largest country in the world at 6,601,670 total miles, has a population of 144.5 million (2017), and a 2017 GDP of $1.53 trillion. But the economies of three much smaller U.S. states wipe the floor of Russia. California has a population of 39.5 million and produced $2.75 trillion of economic output in 2017. Texas had a GDP of $1.7 trillion in 2017 and New York state came in third in the U.S. with $1.55 trillion. Not to mention that Russia’s economy is based on dying industries such as oil and natural gas. Russia is ranked 154th in life expectancy at 71-years-old. If all of those statistics weren’t enough, Russia can’t even build a dancing robot — arguably the best qualifier to determine the most advanced nations on the planet.

Russia state television boasted their state-of-the-art talking and dancing robot with superior AI. The high-tech robot named “Robot Boris” was featured at a robotics expo dedicated to science-loving youth and promoted on Russia-24 television. One itsy-bitsy problem — the robot was just a dude in a robot costume. This is a nasty example of appropriating robot culture and it needs to stop now.

This is the worst RoboCop reboot yet. “Robot Boris has already learned to dance and he’s not that bad,” the host of the TV show boasted. However, viewers noticed that Boris had no external sensors, didn’t move like a robot, had varying types of inconsistent movements during the dance, and the voice was pre-recorded. Oh, and what’s up with a human neck inside the robot suit?

Then a photo of the actor who was in the Boris Robot was unveiled and the sham was exposed. In America, robots take your job. In Russia, you take robot’s job.

A perfect metaphor for Putin's Russia – Robot turns out to be man in suit. Boris the robot featured in a state-sponsored event and was seen walking, talking and dancing. More > https://t.co/Ou0dBaxlbn pic.twitter.com/j1NaRayC8C

This is how we’ll have to vet robots from now on to ensure that they aren’t human posers.

The Boris Robot was actually a $3,700 robot costume named “Alyosha the Robot” made by a company called Show Robots. Talk about fake it til you make it. The great news for this guy is that when the robot revolution goes down he’ll be safe and sound in his robot skins. Russian state-run TV have since taken down the embarrassing video off of their YouTube account.

Russia catch up already, America has had the technology to put humans inside robots since at least 2004 with the A.W.E.S.O.M.-O 4000.

RELATED: Humans Created Robot Doctors And They Did Surgery On A Grape, The Internet Made Hilarious Memes