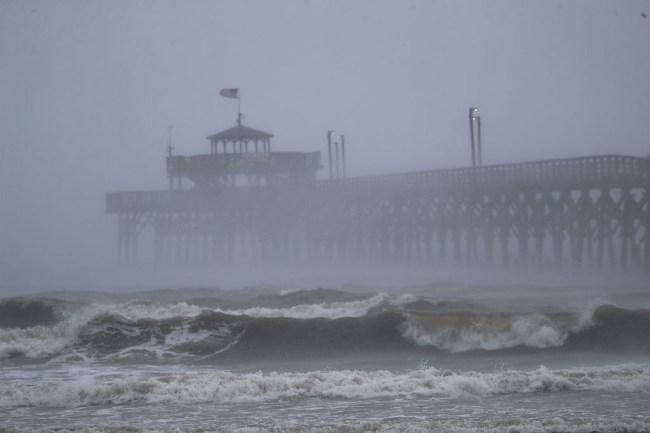 In the past week, millions of people have evacuated the Carolinas for safer ground in preparation for Hurricane Florence, which is currently going H.A.M. on the East Coast after making landfall on Thursday.

However, some particularly brave people have decided to stick around— including an incredibly badass veteran who used “It’s just water” to justify staying put.

You have to be kind of crazy to go toe-to-toe with a hurricane, but for many meteorologists, taking on Mother Nature is written into their job description.

Thanks to these insane souls, we can get to experience the wrath of Florence with having to deal with the threat of being blown away like this MSNBC reporter almost was.

uhhh MSNBC's Gadi Schwartz looks like he's about to literally blow away as he reports live from Hurricane Florence pic.twitter.com/oc95vR935S

Thankfully, he had a massive set of balls to help keep him anchored on the ground.

Schwartz is far from the only correspondent to take on the storm and CNN’s John Berman managed to really put things in perspective when massive winds somehow managed to tear his microphone cord in two.

That’s… that’s not supposed to happen.

Meteorologists at South Carolina’s WTCI also made the decision to ride out the storm and refused to back down even after the building they broadcast from was evacuated.

On Thursday, Donnie Cox and Shane Hinton informed viewers they’d be remaining on the air despite the threat posed by Florence.

On air meteorologists in New Bern casually explaining the building has been evacuated due to Florence’s storm surge but they’re sticking around to stay on air and inform the public pic.twitter.com/bOaaM8eP8n

Unfortunately, they hit a bit of a speed bump when they were informed that their studio had to be evacuated in the middle of the broadcast, which led to some oddly creepy dead air.

Based on photos taken inside the studio, it looks like they made the right call.

#HurricaneFlorence forced our team out of the studio last night. A close look at some of the flooding we experienced before evacuation. Full story: https://t.co/qWfZAaueIE pic.twitter.com/2fh8e6Fv6t

It’s hard to give enough credit to the brave men and women on the ground for putting their safety on the line to keep viewers informed (and, in some cases, entertained).

If you need me, I’ll be spending the rest of the day flipping through the channels watching people get pelted by rain for my amusement.