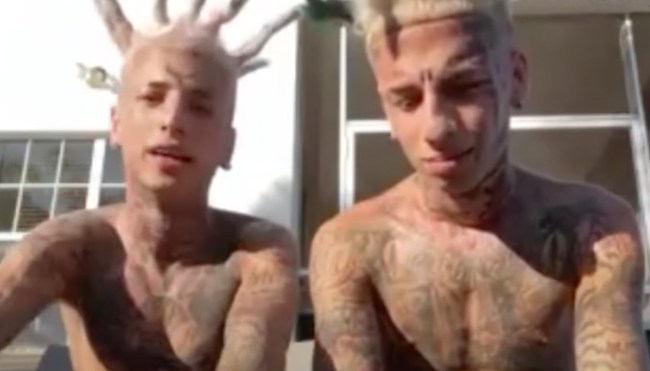 Over the years, the internet has propelled countless people to viral fame, and plenty of them have done everything in their power to squeeze as much attention (and money) as possible out of their moment in the spotlight with varying degrees of success.

That group now includes The Island Boys, the brotherly duo of aspiring musicians known as Flyysoulja and Kodiyakredd that have been trekking through the storm and the rain since achieving online notoriety thanks to a freestyle video that spread like wildfire earlier this year.

Say what you will about The Island Boys, but you have to respect their ability to remain relevant for as long as they have. With that said, they’ve usually popped up in the news for all of the wrong reasons, including the icy reception they received when they performed in public for the first time.

The two of them received a similarly cold response when they attended the recent fight between Jake Paul and Tyron Woodley, where they were loudly booed and found themselves at the center of a fracas after seemingly challenging half of the people in the arena to fight them.

Someone threw a drink at the island Boys pic.twitter.com/bDujUGKM8C

A fan in the upper bowl threw a drink down at The Island Boys and a brawl nearly broke out. Cops told The Island Boys to sit down and “chill out” or else they’ll be removed from the arena. #PaulWoodley2 pic.twitter.com/iJZBDBas0i

Now, TMZ has provided the Island Boys with the chance to tell their side of the story.

Here’s what they had to say during the interview:

“Me and my brother are not out to clout chase or to pick fights or to bully people….We just wanted to go watch the fight.

I didn’t think there was going to be so much tension when we went there. I want people to understand, at the end of the day, we want to be positive role models. We have a lot of kids watching us. There’s gonna be grown men who want to hate on young kids like us…We’re not perfect. We’re going to try our best not to fight with people in public like that.

I’m sure some people would love to think this is the last we’ve heard of the Island Boys, but I have a very good feeling that’s not the case.