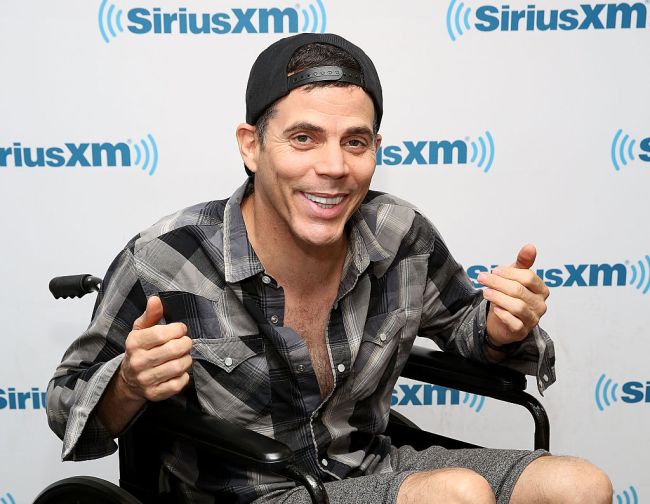 In less than two days of filming Jackass Forever, Steve-O and Johnny Knoxville were rushed to the hospital after a stunt involving tubas and treadmills went off the rails, according to Bam Margera. The crazy part is that there were stunts in the upcoming Jackass movie that were even more dangerous and deemed to be too violent to be shown in the fourth installment of the reality slapstick franchise.

Steve-O and his fellow Jackass star Wee-Man recently appeared on Hot Ones to talk about the upcoming film. Steve-O revealed that there were three over-the-top stunts that were just too reckless to air in the movie.

Steve-O described a stunt named “box down stairs,” where Johnny Knoxville got into a box, then the crew “tucked in some pillows around him, taped it up, rolled it down a huge flight of cement stairs, and it was violent as hell.” Kids, don’t try this at home.

Another act of foolishness was where Knoxville “shot himself with the 38-caliber Smith and Wesson handgun.” Kids, don’t try this at home.

The third outlandish scene deemed too hazardous to show in Jackass Forever was having Knoxville being hit by a car. Kids, don’t try this at home.

“And when he said, ‘I’m Johnny Knoxville and I’m going to get hit by a car real soon.’ Car just came flying, he went through the windshield, rolled over,” Steve-O told Hot Ones host Sean Evans.

Steve-O continued, “They asked him, ‘What were you thinking when you got hit by a car?’ And his answer was, ‘I wore two pairs of jeans so that I’d be safe.’”

Knoxville broke a rib and a wrist during the filming of Jackass Forever. A recent report claimed that the Jackass cast has racked up more than $24 million in hospital bills over the years.

Knoxville did an in-depth interview with GQ, where he said the fourth Jackass movie will be his last.

“You can only take so many chances before something irreversible happens,” Knoxville said. “I feel like I’ve been extremely lucky to take the chances I’ve taken and still be walking around.”