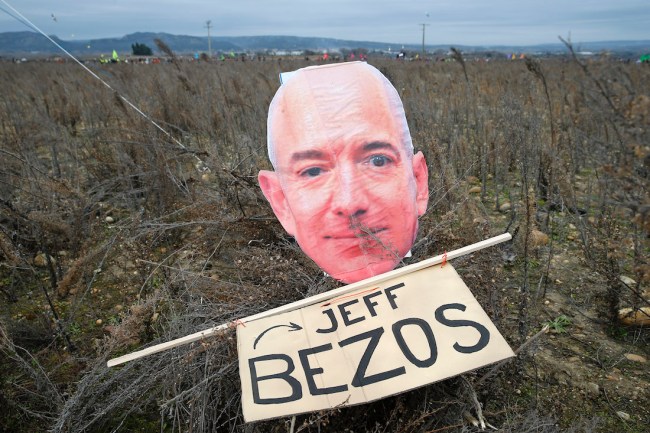 As if Jeff Bezos wasn’t already the world’s biggest villain, Amazon’s CEO really showcased his true colors by reportedly hiring trolls to do defend both he and his company against critics on social media. So, yeah, in other words, the dude was basically cyberbullying because, you know, that’s what the world’s richest human needs to do in 2021.

According to the Daily Mail, in 2018 Bezos had Amazon recruit “an army of Twitter trolls and code-named it ‘Veritas’ to target critics”, which included the likes of former Presidential hopeful Bernie Sanders. While the “army of ambassadors” would defend both he and his company, the so-called advocates became more relevant as a bunch of Amazon employees in Alabama were voting on forming a union following complaints of working conditions. Naturally, this didn’t sit well with Lord Bezos, so he made sure these Twitter trolls worked overdrive to mock such a decision.

Per The Daily Mail:

“To address speculation and false assertions in social media and online forums about the quality of the FC [Fulfillment Center] associate experience, we are creating a new social team staffed with active, tenured FC employees, who will be empowered to respond in a polite—but blunt—way to every untruth,” the project description reads. “FC Ambassadors (‘FCA’) will respond to all posts and comments from customers, influencers (including policymakers), and media questioning the FC associate experience.”

They were told specifically to confront people on Twitter in a ‘blunt’ manner, according to an internal document about their training that was obtained by The Intercept.

Since this is all pretty interesting, and only goes to show the level of insecurity Jeff Bezos has — even though he’s got a net worth of $183 billion (Forbes) and has a company that has literally killed small businesses by taking over the world of online shopping — take a look below at some of the messages these hired Twitter trolls of Amazon posted.

Although the facility is big, there are numerous bathrooms to use. My building has 12. Each bathroom can have 3-6🚽 Thats plenty. Plus with 20-30 mn breaks that's more than enough time,

Hey "Gary at OAK4" – do you get special code names as part of Amazon's Veritas program to tweet out this BS? And, how much do they pay you to sell your soul? Probably quite a bit more than actual Amazon employees.

2/2 We hope you can enact policies that get other employers to offer what we already do.

As somebody who lives in Seattle and loathes the way Jeff Bezos and Amazon have turned the city into a nerd fest with a bunch of people who only want to live there until their stock kicks in so they can move, none of this is all that surprising. I mean, Bezos is a bully and supervillain, who will do anything he can to increase his net worth and grow his company — and this is the latest proof of that.

So next time you go online and plan to bash the multibillionaire or his company, be prepared for the Twitter trolls to come after you. Sadly, these aren’t Joe Schmoes in their basement, but, in fact, hired guns by the richest person in the world. Pretty pathetic.