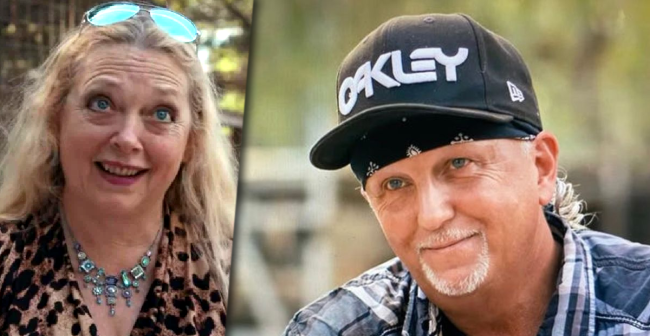 One of the many bizarre things to come out of Nerflix’s monster hit docuseries Tiger King: Murder, Mayhem and Madness was the fact that Big Cat Rescue owner Carole Baskin’s husband Don Lewis just vanished off the face of the Earth and many people out there believe she had something to do with it.

The lawyer for Baskin’s missing husband believes Lewis was strangled and thrown out of a plane.

The local sheriff who has been investigating the disappearance says Baskin forged Lewis’ signature on his will.

Relatives of Lewis have hired attorneys and filed lawsuits against Baskin related to Don going missing.

Plus, one of Baskin’s former boyfriends once filed a restraining order against her after Lewis disappeared.

And while the local sheriff has received numerous alleged tips regarding the case, he’s not the only one. At least according to Tiger King star and noted Baskin nemesis Jeff Lowe.

Lowe recently shared with TMZ an anonymous letter he says he received in May 2020.

The envelope had no return address and was postmarked in Providence, Rhode Island.

Inside the envelope was a letter which read, “The corpse lies under Her House,” and was signed “The Faithful Witness.”

In the video below, Jeff and his partner Lauren are seen speaking on the phone, supposedly with a federal agent, about the letter.

They say they also notified law enforcement in Hillsborough County, Florida, where the Lewis investigatoin is ongoing.

Despite requests by authorities to turn the letter over for examination, Lowe reportedly refused at that time because the producers of a second season of Tiger King requested he hold on to it until filming had concluded.

Now that production of a second season is complete, Lowe says he will be turning the letter over to the Hillsborough County Sheriff’s Office so it can be tested for fingerprints and DNA.

Howard Baskin, Carole’s current husband, told TMZ, “This is just another stupid stunt by Lowe to deflect from his own legal troubles. Only a moron would think that an anonymous letter has any value.”

Carole has already gone on record refuting claims that Don Lewis is buried under a septic tank on her property.

Lowe also claimed recently that Carole and Howard were spying on him using drones. Law enforcement did determine that Baskin was indeed in the area visiting with Lowe’s neighbors.