Jim Beam Warehouses Burn Down Destroying 45,000 Barrels Of Bourbon Worth As Much As $330 Million 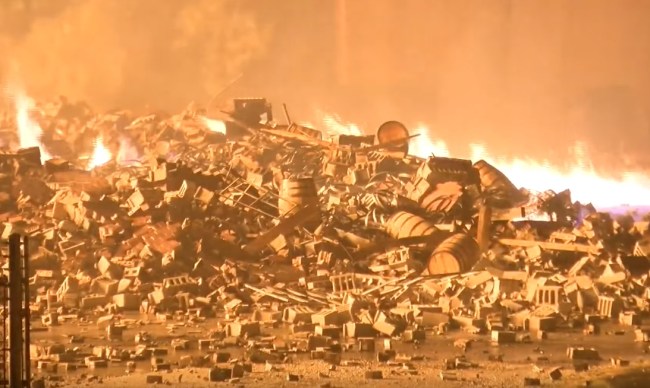 The country is preparing to celebrate our Independence Day, but a calamity has occurred in the heartland of America. A fire has erupted at a Jim Beam bourbon facility in Kentucky and destroyed at least 45,000 barrels of bourbon, which is America’s spirit. Hug your whiskey a little tighter tonight.

Late Tuesday night, two Jim Beam warehouses went up in flames. One fire is still ablaze because firefighters want the alcohol to burn off instead of spilling into a nearby river that feeds a drinking water facility.

Authorities are concerned the bourbon could “contaminate” the water. Them’s fightin’ words right there. We should all be so lucky to have our water “contaminated.” To their credit, there was a firenado at a lake near the Jim Beam facility a couple of years ago.

Around 11:30 PM on Tuesday, a fire began in one rickhouse and then quickly spread to a nearby aging facility.

The cause of the fire is unknown, but Woodford County Emergency Management Director Drew Chandler said that “weather could have been a factor.” There have been local reports that the fire may have been caused by lightning.

Thankfully, no one was injured in the fire. Jim Beam’s parent company Beam Suntory thanked first responders and said they will “work with local authorities to confirm the cause and to remediate the impacts.”

“We operate 126 barrel warehouses in Kentucky that hold approximately 3.3 million barrels for our brands, and the warehouse that was destroyed contained 45,000 barrels of relatively young whiskey from the Jim Beam mash bill,” a spokesperson for Jim Beam said.

“Given the age of the lost whiskey, this fire will not impact the availability of Jim Beam for consumers.”

“We have a comprehensive warehouse safety program that includes regular inspections and rigorous protocols to promote safety and the security of our aging inventory,” the spokesperson added.

And if you remember, this time last year, there was another bourbon apocalypse when a warehouse collapsed in Bardstown, Kentucky. Then on July 4th of 2018, of all days, there was a second bourbon warehouse that collapsed that lost 9,000 barrels. Why God, why?