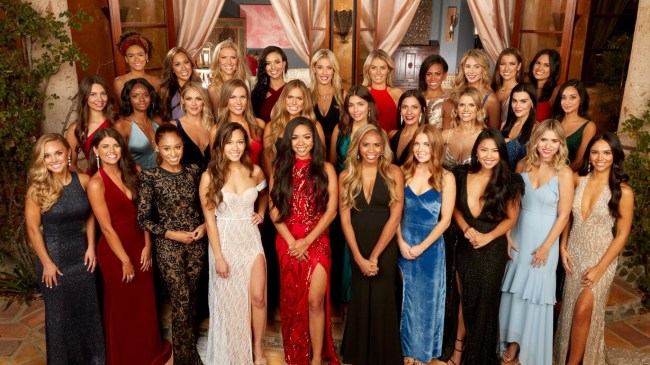 Imagine approaching your boss on a Monday morning and telling him or her that you need to take nine weeks off to get hammered in a ball gown and cry on national television over a person you met for 29 minutes.

You’d be laughed out of your cube and into the basement with Milton.

Thirty beautiful women had no such issue clocking out for a few months to scratch and claw their ways into the monogamous arms of Peter Weber, the Bachelor for season 24.

This begs the question: What in the hell do these women do? Or not do?

Tip: If you add -ier onto anything, you sound like the ultimate authority on that particular subject.

Can’t wait to text my dad tonight and tell him I’m switching industries and becoming a Clothier. You should have seen his face when I told him I got a job as a professional bloggier. What a fucking royal disappointment I am.

Tip from someone in the “biz”: If you get yourself a pair or tortoise-shell glasses and a smarmy condescending personality, you can tell people you’re a “writer” instead of a blogger. Then maybe you can get verified on Twitter as a pleasant distraction from the fact that there’s no money in either.

*Eats at Longhorn Steakhouse once*

Not to lean on stereotypes here, but I simply cannot see Avonlea working with meat. Not that kind at least.

Avonlea looks like the aggregate sum of every girl who never talked to me in high school and you expect me to believe that she entered the same profession as Dale Larson, the guy who wore a stained Billabong sweatshirt to school every day and drank a 24 oz. Monster in home room?

I guess you should never judge a book by its cover or a cattle rancher with all her teeth.

Yeah Yeah Yeah, every popular girl in high school with a camera a phone camera, a juicer, and season 11 of Project Runway on DVD is a “model.”

*buy protein tea using promo code: HANNAH ANN and DMs her screenshot of receipt to try to buy her love*

*grow increasingly jaded with each passing day she doesn’t respond*

At Tammy’s age of 24, I lived among the rats in a glorified closet in New York City’s least desirable area and was eating taco shells and salsa for dinner.

I need to suspend reality to believe that Tammy’s out here buying and flipping houses in the time it takes for you to say ‘53 percent of millennials have received financial assistance from a parent.’

Speaking of Flipper, quick homage to the GOAT job title from a previous season…

Thank you for aspiring to do God’s work, Alexis.