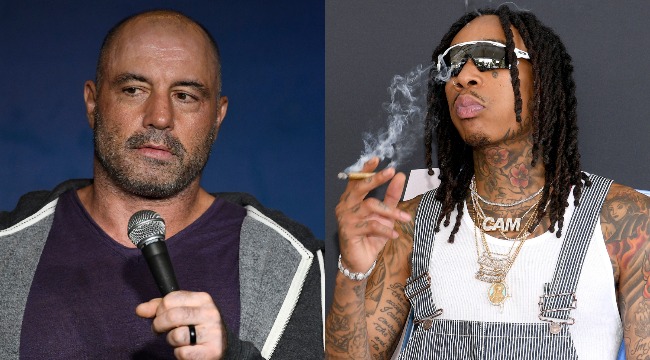 Joe Rogan’s California exodus continues, as the most prominent podcaster in the world recently sold his Bell Canyon property for $3.45 million, a full $250,000 above asking.

Rogan purchased the home in 2003 with that Fear Factor money, a property that spans 7,573 square feet, features five bedrooms, five bathrooms, a meditation atrium, al-fresco dining, a pool and spa, and most likely a room solely dedicated to DMT.

No thanks to California’s immense homeless problem and its handling of the pandemic, the 53-year-old famously relocated to Texas, purchasing a $14.4 million lakefront mansion, one of the largest transactions in area history.

The coolest studio in the solar system, home of the Joe Rogan Experienceq @joerogan pic.twitter.com/KOQAFufMml

UFC great Tyron Woodley recently joined our Endless Hustle podcast to discuss his admiration for Joe (despite dust ups in the past) and how his friend Wiz Khalifa enlisted him to play broker in a bid for the studio Rogan purchased in 2012.

“Wiz wanted to buy a studio in L.A. because he didn’t know that he was keeping both. There’s a gym in there, he can record music in there and lift weights in there. So Wiz was like, ‘Hey man, hit Joe up and see if I could buy that studio from him.”

.@twooodley has been critical of @joerogan's UFC commentary in the past, but the former welterweight champ can't help but respect Rogan for the way he handles two things:

It’s hard to conceive that Rogan would allow anyone to transform the vessel that catapulted him into a household name. My guess is that by 2025, it will serve as a museum for anyone looking to shoot flamethrowers before having a shroom-induced panic attack in the deprivation tank.