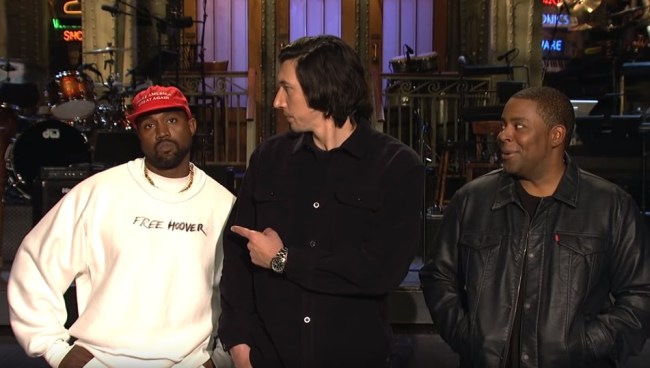 It’s been 10 days since Kanye West appeared on Saturday Night Live, but the shockwaves from his controversial rant at the end of the show are still being felt over a week later. Kanye’s impromptu post-show diatribe already prompted SNL castmate Pete Davidson to call West “mentally ill” and a “jackass” earlier this week. Now Kenan Thompson has words for Kanye.

During Kanye’s SNL appearance, the rapper wore a “Make America Great Again” hat and said he was “bullied” by Saturday Night Live cast members. After performing his song “Ghost Town,” Kanye discussed his plans to run for President of the United States and shared his support for President Donald Trump.

Trump then defended Kanye from criticism from his Saturday Night Live appearance.

Like many, I don’t watch Saturday Night Live (even though I past hosted it) – no longer funny, no talent or charm. It is just a political ad for the Dems. Word is that Kanye West, who put on a MAGA hat after the show (despite being told “no”), was great. He’s leading the charge!

Last week, Kenan appeared on Late Night With Seth Meyers where he explained how Kanye held the SNL cast “hostage.” Thompson said Kanye invited the cast onstage and then gave a pro-Trump speech at the ending of the season premiere.

“We’re all entitled to our opinion,” Thompson said, “I don’t know if that’s the moment, necessarily, to hold people hostage like that, but hey.”

Thompson, who is the longest-running SNL cast member of all-time, also appeared on the Late Night With Seth Meyers podcast where he gave more details about Kanye’s rant.

“It has to have been one of the top five weirdest goodnights with Mr. West,” Meyers said joked. Meyers added, “I would say the absolute top.”

“That was just gnarly, he’s such a setup artist,” Kenan said of Kanye. “He invited the cast back up there to immediately shit on them. What kind of like weird, let me be the puppet master type shit is that? I’m so glad that I’d gone to my room to change.”

“It’s just leaning your personal opinion so heavy on others,” Thompson said. “It’s like everybody’s opinion should be up for debate. You’re putting it out here like what your word says goes, and that’s just not fair.”

In other Kanye West news, he will visit the White House on Thursday to talk to President Trump. The rap star and the businessman turned POTUS will have lunch together and discuss “manufacturing resurgence in America, prison reform, how to prevent gang violence, and what can be done to reduce violence in Chicago” according to White House Press Secretary Sarah Sanders.

Trump and Kanye famously had a meeting last December at Trump Tower.

Here are Kenan and Kanye during “happier” times.