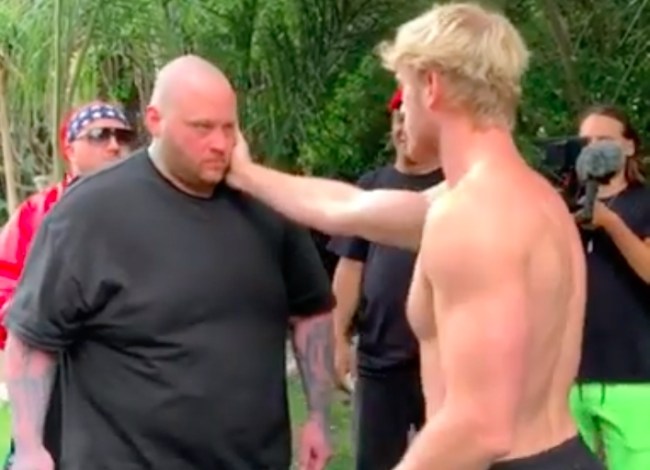 The radio. The helicopter. Synthetic rubber. Irina Shayk. Russia has brought forth some life-changing inventions, but their biggest contribution to the world has undoubtedly been the Russian Slapping Championships.

A couple months back, videos of the tournament began circulating the web, featuring grown ass men open-hand slapping other grown ass man in pursuit of the 30,000 rubles grand price ($470) and everlasting glory.

The world has been like a moth to light with this content, and amateurs around the globe have tried their hand (ha, pun!) at the sport.

YouTuber Logan Paul is had been training to take on Russia’s slap champion Vasiliy Kamotskiy under the title ‘Battle on Volga’, which was set to happen on May 25 in the Russian city of Tver.

Kamotskiy, who is known as ‘Pelmen’ (Russian for Dumpling), is a monster–weighing 370 lbs. and evidently carrying a lot of internal rage.

the Russians are preparing… pic.twitter.com/MES7OvaAUj

But, Paul pulled out from the competition after he nearly decapitated a dude during a training session, knocking him unconscious with a vicious blow.

This dude must’ve been fucked up because Paul issued a statement via his media company that due to “unfortunate” events that took place, he has decided to pull out of the competition. Paul added he doesn’t have the “desire to participate in an event that can result in serious injury to virtually anyone competing.”

After an unfortunate incident at practice today, I’ve decided not to compete in the Russian Slap Competition. pic.twitter.com/ArC03yvIR2

Bottom line: leave it to the professionals…

P.S. YO RUSSIA: Contestants should be required to shave their beards before entering. It’s a lot less painful to take a slap when you have a thick cushion to absorb the blow. This seems like common sense. Fix it.