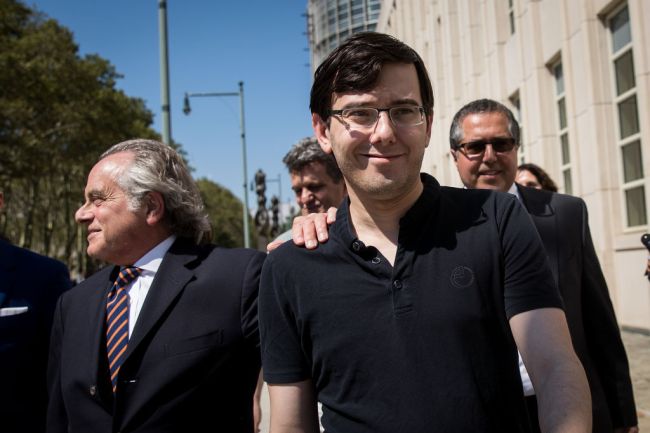 Shkreli’s attorney Ben Brafman released a statement on Wednesday revealing that the disgraced had been released from the Federal Correctional Institution (FCI) Allenwood Low, and would be taken to a U.S. Bureau of Prisons halfway house in New York to finish out his sentence.

“I am pleased to report that Martin Shkreli has been released from Allenwood prison and transferred to a BOP halfway house after completing all programs that allowed for his prison sentence to be shortened,” Brafman said. “While in the halfway house I have encouraged Mr. Shkreli to make no further statement, nor will he or I have any additional comments at this time.”

A Bureau of Prisons spokesman said, “Community confinement means the inmate is in either home confinement or a Residential Reentry Center (RRC, or halfway house). Mr. Shkreli’s projected release date from the custody of the BOP is September 14, 2022. For safety and security reasons, we do not discuss any individual inmate’s conditions of confinement to include transfers or release plans.”

“Getting out of real prison is easier than getting out of Twitter prison,” Shkreli wrote on his Facebook page Wednesday – a reference to being banned on Twitter.

Shkreli reportedly was released out of prison early because of good behavior and for completing education and rehabilitation programs while he was incarcerated.

A photo began circulating on Twitter of Shkreli allegedly being picked up at the prison.

Twitter user Edmund Sullivan posted a photo of a smiling Shkreli in a car with the joking caption: “Picked up this guy hitchhiking. Says he’s famous.” Another photo shows the 39-year-old disgraced pharma bro with a man wearing a “Free Shkreli” t-shirt in what appears to be the inside of a Cracker Barrel restaurant. Hopefully, he had the Chicken n’ Dumplins and was able to successfully finish the peg game.

In March 2018, Shkreli was sentenced to seven years in federal prison for defrauding investors at two hedge funds to establish his first drug company – Retrophin.

Less than five years into his seven-year sentence, Shkreli was released from federal prison, but must serve his remaining time in a halfway house.

In January, a federal judge banned Shkreli from the pharmaceutical industry for life. Shkreli was also ordered to pay nearly $64.6 million in civil penalties for engaging in anticompetitive conduct to protect profits made from Daraprim.

At his peak in 2017, Martin Shkreli had a net worth of $70 million. However, it is estimated that his current net worth is $0, according to the Celebrity Net Worth website.

Shkreli garnered national infamy and became a reviled public figure for many in 2015 when his company Turing Pharmaceuticals (now Vyera Pharmaceuticals) jacked up the price of the life-saving, anti-parasitic drug Daraprim by 5,500% overnight.

Shkreli became even more polarizing when he purchased a one-of-a-kind Wu-Tang Clan album for $2 million.