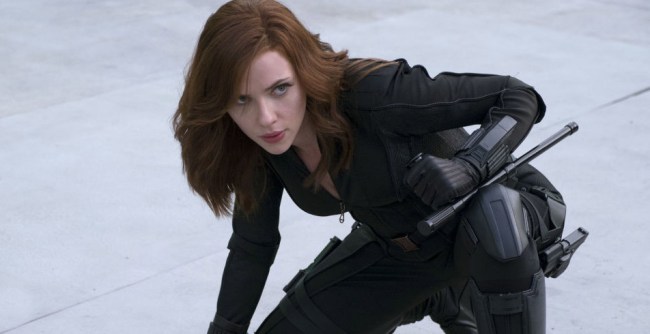 Assuming everything goes as planned, the year 2020 is going to be one hell of a good one for female superheroes.

We also recently learned that Birds of Prey (And the Fantabulous Emancipation of One Harley Quinn) is scheduled to hit theaters on February 7, 2020.

And now comes word that what appears to be the second film in Phase Four of the Marvel Cinematic Universe (Spider-Man: Far From Home being the first), appears to FINALLY be a standalone movie for Scarlett Johansson as Natalia Alianovna Romanova, aka Natasha Romanoff, aka Black Widow, is also planned for a 2020 release.

Hopefully, it will be better than this one…

The story, according to the movie’s IMDb listing, will be…

At birth the Black Widow (aka Natasha Romanova) is given to the KGB, which grooms her to become its ultimate operative. When the U.S.S.R. breaks up, the government tries to kill her as the action moves to present-day New York, where she is a freelance operative. The standalone film will find Romanoff living in the United States 15 years after the fall of the Soviet Union.

Sounds about right. Especially if you’ve read the Black Widow books by Margaret Stohl (which I highly recommend doing).

Also, according to a new report from Production Weekly (via Flickering Myth)…

According to the listing, cameras are set to get rolling on the long-awaited solo movie in late February, shooting in the UK for three months through to mid-May.

Cate Shortland (Berlin Syndrome) is set to direct Black Widow, with Johansson reprising the role of Natasha Romanoff. Details have been kept under wraps, but it is thought that the movie will take place prior to Black Widow’s MCU debut in Iron Man 2 and explore the character’s origin.

Another report, which surfaced a few days ago, claims Black Widow will reportedly be Marvel Studios’ first R-rated film. Why that would be is up for speculation.

Let’s just hope that Captain Marvel doesn’t bomb at the box office when it comes out on March 8th or, knowing Marvel, we make never get to see Johansson helming her own movie in the role she’s been playing (well) for almost a decade as a supporting actor.