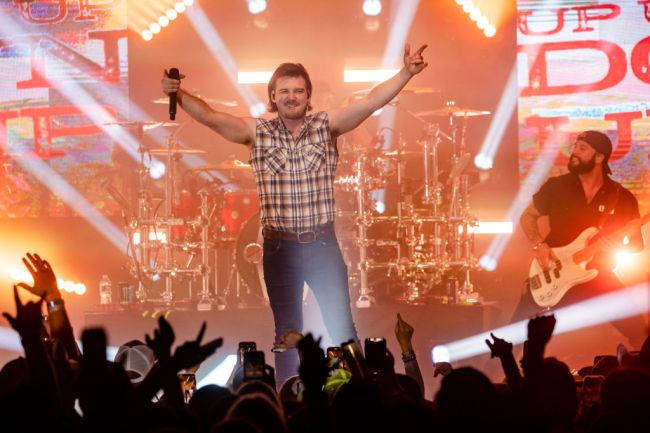 Nashville, Tenn. is back in a BIG way and the stars are coming out to celebrate. Luke Bryan was seen performing at his bar last week and on Wednesday, Morgan Wallen made his return to the stage.

After being spotted hanging out on a balcony with Kid Rock at Kid Rock’s Honky Tonk bar, Wallen performed for the first time since being filmed using a racial slur in February. Ironically, he was arrested at Kid Rock’s bar for disorderly conduct almost a year prior, to the date.

It would appear as though the two had a couple of drinks because before Wallen performed, Kid Rock went first. He got on the mic and started singing ‘All Summer Long.’ However, he forgot the words to his biggest hit.

Shortly after Kid Rock, Wallen joined the John Stone Band for a two-song set. Stone is considered one of the best Honky Tonk performers around and is known as “The King of Lower Broadway.”

“This is my first time singing in public in a long time,” Wallen said before breaking into the smash hit ‘Whiskey Glasses.’

Wallen has been laying low over the past few months and it looks like he hasn’t had a haircut in that time. His mullet has reached legendary length. Stone filmed the entire performance from the on-stage perspective.

After singing a very pumped-up version of his chart-topper, Wallen stripped it back. He played ‘Wasted On You’ from his new album in public for the first time.

What’s next for Wallen?

Wallen recently wrote a handwritten letter announcing his decision not to perform this summer. However, he did say that he will be back sooner than later.

“I’m back in Nashville getting back in the swing of things,” it reads. That is certainly true, based on Wednesday’s impromptu concert. You have to wonder whether his PR folks knew it was happening.

Either way, Morgan Wallen is back and so is Music City. Cheers.