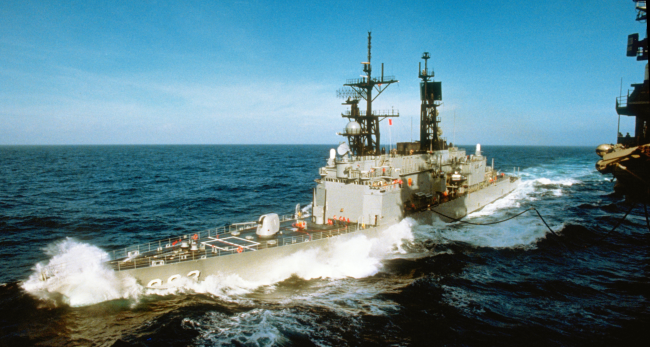 In 2020, documentary filmmaker Dave Beaty noted that ship logs from July 2019 indicated that a SNOOPIE Team – a team of sailors that quickly respond to record and photograph passing vessels and aircraft for intelligence – was deployed to investigate groups of unidentified aerial phenomena (UAP) over the Channel Islands area in California.

This sparked a new investigation by Adam Kehoe and Marc Cecotti of The War Zone which has uncovered documents via Freedom of Information Act (FOIA) requests that reveal the true depth of the incident.

During the evening encounters, as many as six aircraft were reported swarming around the ships at once. The drones were described as flying for prolonged periods in low-visibility conditions, and performing brazen maneuvers over the Navy warships near a sensitive military training range less than 100 miles off Los Angeles. The ensuing investigation included elements of the Navy, Coast Guard, and the Federal Bureau of Investigation (FBI). The incidents received major attention, including from the Chief of Naval Operations—the apex of the Navy’s chain of command.

Did the navy ship #USSKidd #DDG100 encounter a UAP in July 2019 in So Cal OPAREA Trying to find out more. The ship logs indicate a "Snoopy Team" was deployed – an intel section that tries to visually ID objects. DM if you know more. Near San Clemente island #TicTac @UfoJoe11 pic.twitter.com/4thKHhKmDz

Navy destroyers that were in the area on July 14, 2019 included the USS Kidd, USS Rafael Peralta, USS Russell, USS John Finn, and the USS Paul Hamilton.

The USS Kidd appears to be the first to record the presence of what it believed to be UAVs or unmanned aerial vehicles in the area. As a result of the sighting, the USS Kidd, for security purposes, entered into a condition of restricted communications.

Less than 10 minutes after the sighting by the USS Kidd, the USS Rafael Peralta activated its own SNOOPIE team, while even more sightings were being reported by the USS John Finn whose crew proceeded to deactivate the ship’s AIS transponder system.

The USS John Finn then reported spotting a a red flashing light. The USS Rafael Peralta described a white light hovering over the ship’s flight deck in its log.

As unusual as all of that was, it was exacerbated by the fact that the UAP was matching the destroyer’s speed and that the encounter had lasted over 90 minutes – far longer than a typical commerical drone can remain airborne.

That was just the first night.

The next night, July 15, 2019, the USS Rafael Peralta, which had moved to an area between San Clemente Island and San Diego, was the first to see the UAP and deploy a SNOOPIE team, with a log entry reading “Multiple UAVs around ship.”

Around that same time, the USS Russell made numerous entries into its log describing the UAP dropping in elevation and moving forward, backward, left and right.

While this was going on, a passing cruise ship, the Carnival Imagination, notified that USS Rafael Peralta that the UAP were not theirs and that they could also see five or six of them flying in the area.

The event that night lasted almost three hours and in that time not one of the ships was able to positively identify the UAP.

As one would expect, these reports led to an investigation by Navy intelligence which ended up including the Los Angeles office of the FBI.

After July 25th, having already ruling out another ship in the area around that time, the ORV Alguita, as well as the Navy itself (the Fleet Area Control and Surveillance Facility based in San Diego), FOIA requests were denied, reportedly due to their classification level.

Coincidentally, on July 25th and 26th and 30th yet more UAP sightings occurred with a SNOOPIE team once again being activated by the USS Kidd.

The authors then write…

It is unclear why anyone would operate drones near Navy warships in such a brazen manner. Commercially available drones are not commonly capable of flying for such long durations across great distances with speeds in excess of 45 miles an hour. Based on the pooled data available from the deck logs, we estimate the drones traversed at least 100 nautical miles in the July 14th incident.

Furthermore, the drones were able to locate and catch a destroyer traveling at 16 knots in conditions with less than one nautical mile of visibility. Equally baffling, their operators appear to have coordinated at least five to six drones simultaneously. Then there is the question of line-of-sight control, and control methods in general, which make the capabilities described all that much more puzzling.

If the drones were not operated by the American military, these incidents represent a highly significant security breach. If they were part of some kind of covert action, it is nonetheless unclear why they were flown so openly and so frequently in almost a harassing manner. More troubling still, if a foreign state actor was involved, where exactly were the drones launched from?

Their investigation including acquiring more Navy documents about the events (and the UAP, which were never referred to in any of the ships’ logs as anything other than “drones” or lights in the sky), is still underway. Stay tuned.

Read the entire in-depth, very detailed report, including copies of numerous redacted Navy documents, over at The War Zone.