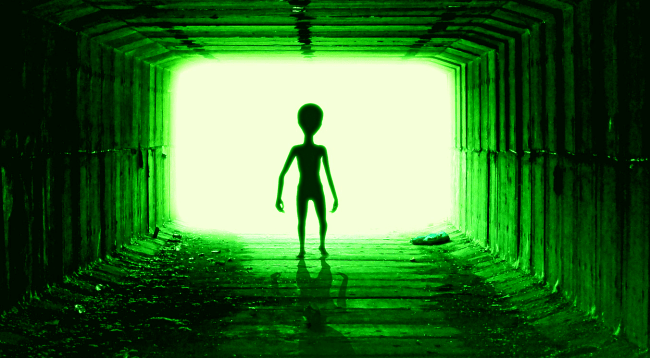 Back in June, several videos and 144 declassified reports about UFO encounters were released by the Pentagon.

It was the most transparent the United States government has ever been regarding what they call unidentified aerial phenomena (UAP).

Many people, however, thought it wasn’t nearly enough, so questions have persisted.

This has resulted in new revelations from the U.S. government such as when they Director of National Intelligence recently admitted that the UFOs that have been swarming American warships could be aliens.

It has also resulted in more Freedom of Information Act (FOIA) requests being made, including one obtained by GovernmentAttic.org and released on Nov. 30, 2021 that contained 181 pages of NASA documents.

In the recently released NASA documents, Karen Fox, Senior Science Communications Officer for NASA, states, “One of NASA’s key goals is the search for life in the universe. Although we have yet to find signs of extraterrestrial life, NASA is exploring the solar system and beyond to help us answer fundamental questions, including whether we are alone in the universe.

“From studying water on Mars, probing promising ‘oceans worlds’, such as Titan and Europa, to looking for biosignatures in the atmospheres of planets outside our solar system, NASA’s science missions are working together with a goal to find unmistakable signs of life beyond Earth.

“To date, NASA has yet to find any credible evidence of extraterrestrial life, but we are not closed to the possibility that such life exists. We stand ready to support the rest of the government in the search for life in the universe, be it close to home, on the planets or moons of our Solar System or deeper into space. The nature of science is to better understand the unknown.”

Fox continued, “Most UAP sightings result in very limited data, usually video recordings from a single angle that can only be cross-validated with eyewitness testimony. The language of scientists is data. But without access to an extensive set of data, it is nearly impossible to verify or explain any observation. The lack of robust data, including the lack of access to some existing data, is the central problem for scientific study of UAPs.”

Marc Etkind, Associate Administrator of Communications for NASA, wrote that a Air Force-led UAP investigation named Project Blue Book “examined several hundred UAP cases from the 1950s and 60s. About 700 of the more than 12,000 cases remained ‘unidentified’ at the close of the project, although [Ohio State astronomer Allen] Hynek later argued that the number of unresolved cases should have been higher.”

He continued, “Lack of reliable data is another crucial reason why the scientific community gave little attention to UAP. Most UAP sightings result in very limited data, usually video recordings from a single angle that can only be cross-validated with eyewitness testimony. Some UAP sightings were also observed on radar, which could assist in determining their identity. Without robust or credible data, UAP studies will always be viewed as fringe science and will never be able to come into the mainstream.”

With regard to the UFO videos released by the Pentagon back in June, Etkind stated, “A notable aspect surrounding the media coverage of the U.S Navy videos is the absence of scientific or expert opinion, in addition to government officials and witness testimonials. If we truly want to understand what UAPs really are, then we need to engage the mainstream scientific community in a concerted effort to study them. This should include the involvement of experts and scientists trained in scientific methodology in such investigations. Make data available to them. Speak their language. Remove any taboos surrounding free scientific inquiry of UFOs. Because, ultimately, understanding UAP is a science problem.”

NASA Press Secretary Jackie McGuinness wrote in the NASA documents, “Central to NASA’s mission is the search for life, wherever it may exist in the universe and at whatever stage. From potential biological life in the clouds on Venus, to squid-like creatures in Europa’s oceans, to ancient, fossilized life on Mars, NASA is committed to investigating the biggest question that we face as humans: Are we alone in the universe? While NASA has yet to find any credible evidence of extraterrestrial life, we are not closed to the possibility that such life exists. The nature of science is to better understand the unknown. When we learn of unidentified aerial phenomena, it opens up the door to new science questions to explore.”

View all 181 pages of the documents released to GovernmentAttic.org here.