Former Air Force Officers Share Evidence, Tales Of UFO Encounters: ‘The Truth As We Know It’ 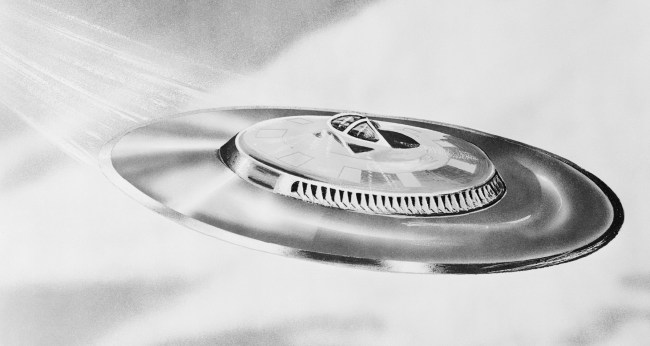 “Former Air Force officer, Robert Salas, was the on-duty commander of an underground launch control facility assigned to Malmstrom Air Force Base, Montana, on March 24, 1967,” read a press release published prior to the event.

“He has publicly stated over a span of twenty-five years, that all ten of his ICBMs became inoperable and that eight days earlier, on March 16, 1967, a similar incident occurred at another missile launch control facility.

“This press conference will present witness testimony and other evidence of a many of such incidents.”

The Debrief, which spoke to Captain Salas prior to the Air Force officers’ media event, covered the press conference and filed a lengthy report as well as an audio interview with Salas.

During Tuesday’s press conference, former USAF captain and nuclear missile targeting officer Robert Jamison told a story about one night in late March 1966. On that night, Jamison had been ordered to the Oscar Flight launch facility, where several of its missiles had somehow been disabled.

“Bob, did you hear what happened?” Jamison recalled being asked when he arrived at the hangar. “The sheriff in Roy, Montana… reported a UFO in the area, told the Air Force, and at the same time ten missiles in Oscar Flight went off alert.”

“To go off alert for no reason, and then have ten missiles to go off alert? This never happened before,” said Jamison.

“Even though I never saw a flying saucer or a UFO, I do know they exist because they knocked down our missiles,” he continued. “That just doesn’t happen every day.”

Later in the session, Salas addressed a statement from the recent report delivered to the Office of the Director of National Intelligence. That report revealed there were more than 140 instances of Unidentified Aerial Phenomena (UAP) collected since 2019 by the Navy’s UAP Task Force that “probably do represent physical objects.”

“This is a pretty startling admission by the Department of Defense,” said Salas. “I certainly have never seen anything like this before.”

Two days after watching and recording a “missile until it went out of sight” Jacobs says he was called to the office of Major Florenze J. Mansmann, then the Chief Science Officer at Vandenberg Air Force Base.

“There were two guys,” Jacobs recalled. “Two men in gray flannel suits,” who joined Jacobs and Mansmann in the room where a film projector had been set up. After Jacobs described what he and his team had observed, he was asked to sit down and watch the footage of the launch.

“The most amazing thing happened,” Jacobs said, as he recalled watching the missile going through its planned stages. “[The missile] was flying along, going about 8000 miles an hour now.”

“At that point, the warhead tumbled out of space, “Jacobs said.

“When asked what the object was, Jacobs told his superior officer that it looked like they had captured a UFO on film. Jacobs was told never to talk about the incident.

“It was shaped like a flying saucer,” Jacobs added. “How could such a thing happen? That thing was up there. I saw it, it was on film.”

“What had happened to me [was] my world changed,” Jacobs remembers. “My worldview changed, but I was under orders to shut up, so I shut up… part of the U.S. Air Force coverup, in fact.”

Former USAF captain and nuclear missile crew commander David Schindele also spoke during the meeting, and issued a scathing indictment of the U.S. government and military when it comes to their handling of UFOs.

“We are all proud of our integrity, and the Air Force relied on us because of it. However, the Air Force has not been honest with Congress, and the American public,” said Schindele.

“The Air Force continues with this proclamation that UFOs do not exist or pose a threat to National security. I was held hostage to both those lies for about 40 years, and it is past time for the truth to come out and be revealed,” he continued.

“Congress and the intelligence community have a responsibility here and others must be released from the burden of holding back the truth.”

View and listen to the full National Press Club conference held by the four former U.S. Air Force officers below…

During his interview with The Debrief, Salas asked the question that has been on the minds of many over the past several decades: “Will the government tell us the truth about what they’ve known now for decades, almost 70 years or more?”

It seems doubtful, but with people like Salas and Luis “Lue” Elizondo, the former director of the Pentagon’s Advanced Aerospace Threat Identification Program (AATIP), and others coming forward with first hand accounts and information we’re getting closer to the truth than ever before.

Top photo original caption: “U.S.A.F. to have ‘Flying Saucers.’ Washington, D.C.: The U.S. Air Force announced yesterday that sensational, new fast flying jet planes resembling the popular conception of the flying saucer will take the air soon. Above is an artist’s conception of the vertical rising disc shaped aircraft under development for the Air Force by Avro, Ltd., of Canada. The plane will be tested in California in a few days. The announcement was made along with a lengthy report which stated that nearly 5,000 investigations since 1947 have produced no evidence of mysterious saucers.”