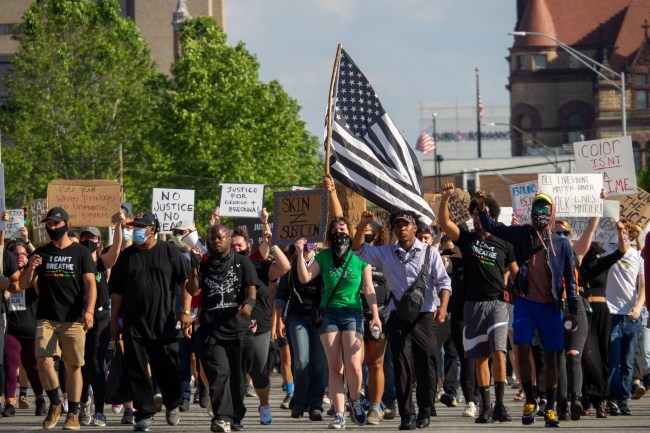 Every dad tells his kids glory stories. That’s probably the best part of being a dad. Because seven-year-olds believe everything their dads tell them. 600-pound marlin caught on a fly rod? Whoa, dad. Spent four years in the minors before retiring to become a P.E. teacher? Awesome, dad. Had unprotected intercourse with a Ukrainian pole vaulter in the Olympic village, resulting in a sister you’ll meet someday? No way, dad!

I’ve been thinking about how I’m going to explain this period to my kids someday. I know they’re going to ask me what it was like to live through the time of the Coronavirus, and the protests that erupted in the middle of it. Let’s just say that I plan to take a few artistic liberties with the truth.

Last week, my girlfriend and I left the pastoral, downeast comfort of Maine—just ranked the #1 safest state in the country—to return to New York City. Our reasons for heading back were threefold: first, my Peloton was arriving. Second, we needed to see friends because our friendship with each other is the sort of friendship you hear about in wedding vows, aka not real. And third, she had to move in to my apartment. That last piece was big, and required a LOT of work on her part. She organized movers, cleaned up her old apartment so someone else could take her place, and then had to make space in my (our?) place for all her stuff. Watching her relocate so many of my belongings to smaller draws and closets, “maximizing space” as she calls it, would have been hard to watch had I not been playing golf. Thank God I was playing golf.

As we drove the five and a half hours from Maine to Manhattan, our mood lifted. We were excited for the change of scene, for the sense of returning to our home, for the onslaught of energy one feels in New York City. Sure, it had been the epicenter for COVID since March, but we were armed with disposable masks and king size hand sanitizers. For my part, I guessed that I had the antibodies given that I’d suffered the dreaded COVID toe some weeks prior.

It didn’t take long for our spirits to crash. We arrived late last Wednesday night, and I dropped her off while I searched for parking. Grinning and forgetting where I was, this happened:

Last night, I pulled in to NYC. Been gone 2 months. Spent an hour looking for a parking spot. Found one near a hydrant but wasn't sure if it was too close. Asked a guy "hey bud, any idea if I can park here?" and he said "it's a fucking hydrant" and kept walking.

Nice to be home

Ah, New York. Where the air tastes like marbled rye and “fuck off” is a gentle hello. Even so, I found a spot, hoisted my golf clubs from the car (you don’t leave a custom-shaft Taylormade M3 in the car overnight lol) and entered my apartment. Home, sweet home.

Life was relatively quiet for the next few days. After work, we walked around and rediscovered the city in its new form. The protests over George Floyd’s killing hadn’t yet spread to New York, but they were coming. On Sunday afternoon, I took a citibike around Manhattan. In the meatpacking district, carpenters cheerfully fitted boards to the windowed façades of the Apple store, Hermès, and Brunello Cucinelli. Meanwhile, young people sat beneath their ladders upon picnic blankets and drank white wine from plastic cups. I sensed dismissiveness, much like when New Yorkers await the one big annual overblown snow storm. The looks seemed to say, ‘the city is battening down its hatches in a show of over-cautious preparation, and it’s much ado about nothing.’ Sure, there had been a few protests on Saturday night. But everything was still intact. The cupcake stores were baking.

That evening, my girlfriend and I strolled through the West Village. We ordered spicy $16 margaritas from pop-up tables set in the doorways of adaptive restaurants, which we sipped through straws beneath our masks. But as we turned for home, we ran directly into a 600-person protest. NYPD officers bookended the throng as it looped through Chelsea, and it resembled the women’s marches I’d seen in recent years: passionate yet peaceful. Even so, the movement was here.

We stood on the periphery as it passed, in awe of the unified voices and the intensity of feeling that radiated off the mass of people. If either of us thought of folding in with the group, we didn’t voice it. The twitter clips of tear-gassing, window-smashing, and nightstick-kneecapping had scared us. The protest disappeared around a corner, and we returned home.

My apartment is on the ground floor of our building. We’re on the back side, off the street, but my bedroom doors are made of glass—basically just windows. Around 11:30PM, a helicopter was idling directly overhead. For those of you who sleep to ambient noise, “riot-control helicopter” is not a fun setting. I haven’t slept so poorly in a long time. The night air was punctuated by ominous booms and the tinkling of shattered glass, at unpredictable intervals. Around 4AM, I gave up and went upstairs to survey the damage on social media. SoHo, just 15 blocks away, had been hit hard. Later that day, we packed up and drove back to Maine.

My mother was a flower child. She grew up protesting the Vietnam War in the early 70s, and I loved her stories of activism, togetherness, and mind-expanding drug trips. Still, I’ve always wondered when, or if, my generation might experience a similar moment. Most of the protests I’ve seen in my life were more specific in their cause and scope, heartily felt by those affected but less likely to rouse across ethnic and cultural lines. This, now, feels like the one. This is the most galvanizing cause I’ve seen in my lifetime.

For my kids, can I say that I was there? Because I WAS there—in New York City, as the police cars burned and the shops were razed—but I wasn’t in it. I’m too much of a pussy to get near protests that might become riots. I don’t even like going to bars where you can’t sit down, much less pack myself into a protest of some 500 furious people surrounded by the very cops they’re protesting.

But as far as my kids are concerned? I was yelling into a bullhorn. I was pouring 2% milk on recently pepper-sprayed faces. I was prying Rolexes from the hands of looters and returning them to shop owners. I was starting chants and taking fire hose blasts off my shoulders, shielding those too undisciplined to do kettlebell cleans. It may sound self-serving, or vainglorious, but here’s why I can justify lying to my kids: they need to think that this stuff was good, and just, and above all, necessary.

For in the end, a little lie about dad’s involvement might be just what they need to give a shit about the big causes of their time.

PS- we had a fantastic discussion about all of this with our friend Charles McBee on Oops today. It’s worth a listen.