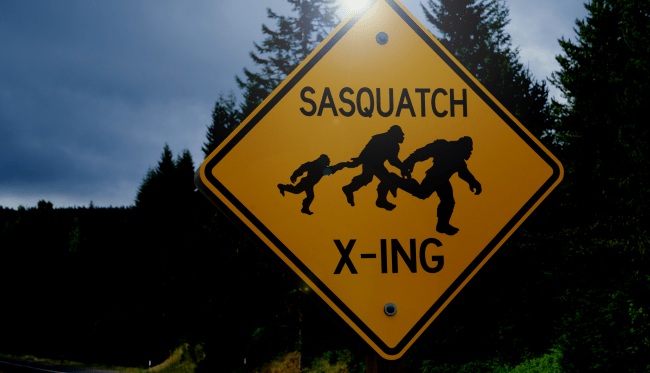 Back in January when District 19 State Rep. Justin Humphrey introduced a bill in the Oklahoma state House that would institute a official Bigfoot hunting season there was much ado over the frivolity of government spending time on such an issue.

There were also quite a few people who got their knickers in a bunch worried that this Bigfoot hunting season would mean that if someone actually saw the legendary Sasquatch they would shoot him dead. (Yes, there were a handful of people that were actually concerned about that happening.)

Unfortunately, and rather expectedly, House Bill 1648 failed. Especially after Micah Holmes of the Oklahoma Department of Wildlife Conservation, who would have been put in charge of the Bigfoot hunting season, said, “We use science-driven research, and we don’t recognize Bigfoot in the state of Oklahoma.”

The last time we checked in on this Sasquatch situation in Oklahoma the bounty was just $2.1 million, but last week on the floor of the House of Representatives in Oklahoma Rep. Humphrey made a big announcement.

Last week Rep. Humphrey announced the bounty for the live capture of Bigfoot has now risen all the way up to $3 million! Who’s wasting government time now?!

“We don’t hunt Bigfoot. Nobody wants to harm Bigfoot. We’re going to do a live, humane capture of Bigfoot,” said Humphrey to his peers and the gathered media. (Yes, there was media there for this announcement.)

There are rules to follow, however. Not just anyone can go off half-cocked and kidnap an extra tall creature with an excessive amount of body hair.

According to the The Norman Transcript, “The No. 1 rule — Sasquatchers must capture Bigfoot unharmed and can’t injure anyone else or break any laws in the process.”

Some people in the area (and around the nation) have called all of this Bigfoot talk nothing more than a publicity stunt or a tourism promotion.

Those suspicions have only been bolstered by the fact that film producer Stephen Stafford and his crew is shooting a Bigfoot documentary series primarily in Honobia, Oklahoma. Or that Honobia is the “home” of Bigfoot and site of the annual Bigfoot Festival and Conference.

As for all of the publicity this Bigfoot bounty has received, Rep. Humphrey said, “Who knew that that would go international and that we would gain so much attention? I did plan on trying to get a little attention for a festival in Honobai, Oklahoma, which is where everyone knows where Bigfoot lives.”

Sadly, not everyone is applauding his efforts. Not D.W. Lee of the Mid-America Bigfoot Research Center. (Yes, such a thing does actually exist.)

“The efforts of the people out there actually being serious about this – it really hampers us,” said Lee.

Of course it does.