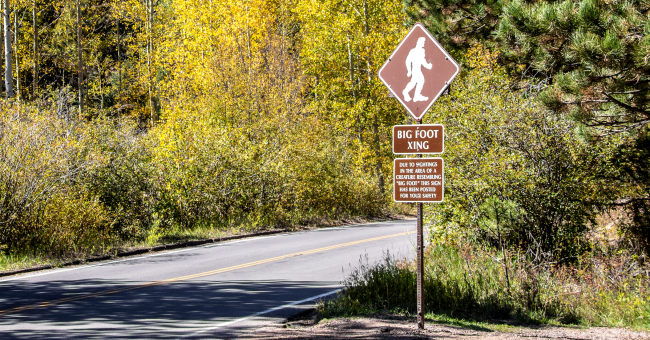 Mike Bodewitz, a hiker in Oregon, recently shared a video on TikTok that he believes captured evidence of another bigfoot sighting.

So now, in addition to the Florida panhandle, northern California, Oklahoma, North Carolina, and West Virginia, we can also stick a pin in the woods of Oregon as possible homes of the ever-elusive bigfoot.

In his TikTok video, Bodewitz claims that bigfoot was watching him from behind some trees as he was hiking along a ravine – and this wasn’t the first time it has happened.

He says he was unable to determine if this bigfoot was male or female, but swears it was a sasquatch, even if some viewers don’t believe him.

“I saw it with my own eyes. I didn’t want to get any closer to make it nervous or anything but it’s clearly keeping an eye on me,” he says in the video. “I felt that I needed to back away and move further up the hill to give it some space.”

He also added that in the past he has “had them make noises to tell me I’m too close or not wanted.”

Not everyone is a non-believer though.

One viewer commented, “Saw one years ago. They are really fast. REALLY fast. It took off up a steep hill like nothing I’ve ever seen. Wish I had more than a flip phone then.”

Another viewer tried to explain to the naysayers, “While I too want action-packed footage, think about it. A large primate that’s stayed largely undetected for millennia? I’d think stealth and patience would be key survival traits.”

Bodewitz’s bigfoot sighting so far has yet to be investigated or reported on by the Bigfoot Field Researchers Organization, or BFRO, (yes, that is a real thing that exists).

However, there are 256 total listings of bigfoot sighting in the state with the most recent report coming from Umatilla County, an area known for something called the “Umatilla Screamer”, a mythical manlike creature said to roam Pacific Northwest forests by members of the Confederated Umatilla, Walla Walla and Cayuse tribes.