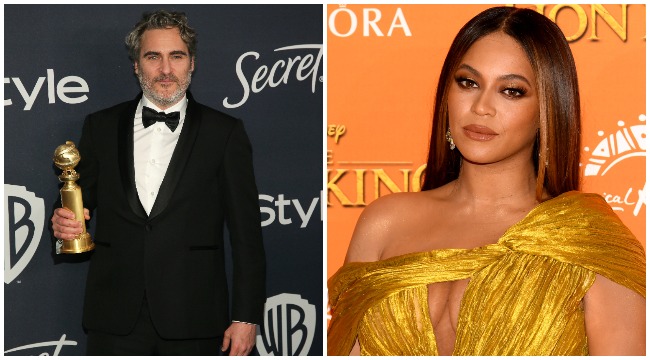 Today on Mad Online: Golden Globes Edition, we get unreasonable upset that a stranger didn’t contort her body properly to express a satisfying level of enthusiasm about something subjective and ultimately trivial!

As a reminder, you can only be considered for the Mad Online army if you one or more of the following applies to you.

Ok. So now that we weeded out the strong ones, let’s use our mental bandwidth to shame Beyonce for not giving Joaquin Phoenix a standing ovation for dressing like a clown and making millions (Disclaimer: I thought Joaquin was unbelievable in Joker, but if I dressed like a clown and danced in the streets, I wouldn’t make millions, I’d make the sex offender list).

Queen B, who was dressed like my last acid trip, refused to join the masses in giving Joaquin Phoenix a standing ovation for Joaquin winning Best Performance by an Actor in a Motion Picture – Drama for Joker.

Beyoncé sitting during the standing ovation for Joaquin Phoenix's win is the type of energy I want to see from everyone in 2020 pic.twitter.com/EJD8uq4mHq

@Beyonce You’re a joke for not standing up for Joaquin Phoenix. Understandable to make a statement. But that’s just poor sportsmanship for someone that actually deserved recognition. You’re entitled and arrogant. And as an actress you’re a joke. Smh. You ought to apologize to him

People really on here praising Beyonce for being a rude ass and not standing for Joaquin when literally everyone else was? #GoldenGlobes pic.twitter.com/Wueiy0ijRw

Beyoncé needed to drag her lazy, disrespectful ass out of that seat for Joaquin Phoenix. She can be a slob at home

Yes, that is Joaquin Phoenix, who won a Golden Globe tonight for his role as the Joker in 'Joker', something Beyoncé did not do. pic.twitter.com/709YuhgA9X

Out of respect, she should’ve stood up. Wtf

Joaquin is better than Beyoncé https://t.co/nSFGIL4z7T

In Joaquin’s acceptance speech, he did exactly what Ricky Gervais sternly instructed celebs not to do: preach. Phoenix brought up global warming (“We don’t have to take private jets to Palm Springs … I’ll try to do better, and I hope you will too) and thanked the Hollywood Foreign Press Association for its meat-free meal.

BLAH BLAH. The Golden Globes should require every winner to reveal their biggest insecurity they have in themselves rather than talk down to us about social issues. That’s a Golden Globes I’d actually watch.