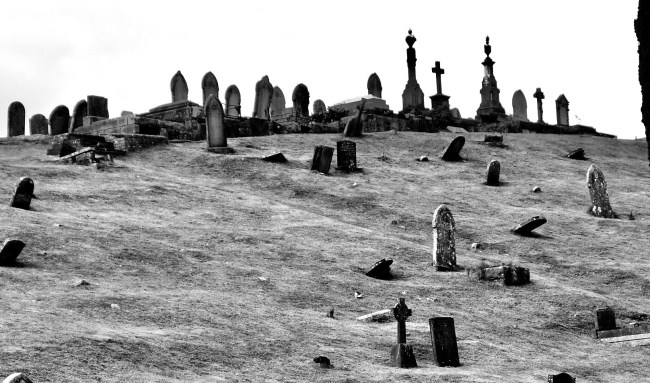 Awhile back I shared some stories from casino workers about the saddest things they had ever seen. It caused me to think that working in a casino has to be one of the more depressing jobs you could have (unless you work in upper management).

However, as depressing as I am sure that can be, I’m going to go out on a limb and say that working at a cemetery or graveyard might just be a little more dispiriting.

Speaking of spirits, someone on Reddit recently asked people who have worked at cemeteries and/or graveyards what kind of strange and scary stuff they witnessed while on the job.

By the way, what exactly is the difference between a cemetary and a graveyard? According to someone on Quora (so it has to be true), graveyards in Western history were often associated with churches, while cemeteries have been mostly private businesses.

A graveyard was not to be a beautiful place- it was just a place to bury the dead in a religious manner – a decent burial.

A cemetery was planned to have walkways through it – it was deliberately landscaped with the intention that families would find it a pleasant place rather than the foreboding place that a graveyard could be.

Now then, back to the creepy tales shared by people who’ve worked in cemeteries and graveyards. Buckle up.

#1: “In the cemetery mausoleum-chapel where I occasionally play the organ for funerals, vandals had broken in the night before a service,” wrote Back2Bach. “They smashed several crypt covers (probably with sledge hammers), exposing the remains of those that had been entombed therein. It was an eerie atmosphere to hold a funeral service that morning with such desecration in plain sight.”

That story there evolved into numerous tales about grave-robbing, which apparently is still a thing, if you’re looking for some further, very interesting reading.

#2: “Aside from the occasional shadows seen out of the corner of my eye, seeing people who turned out to not be there, and hearing strange sounds, the cemetery was actually a quite peaceful place. The strangest is when you have a burial in the crypts,” wrote whiteclawlaw. “Basically, you dig down about 4 or 5 feet to expose giant cement doors. You pull the cement doors off and drop down into a little room. These rooms can fit 2 coffins, OR years and years and years worth of cremated remains. So back in the 50s and 60s, family’s would buy one crypt and the entire fam would be cremated and put in it. Some just put the cremated remains in it and close her up, but others light candles and leave flowers and souvenirs and pictures and shit. Its fucking creepy opening up one of those bad boys after 50 years and finding melted candles and old pictures of the people inside. Plus when you hop down in there you have a weird realization that you are at the same level and completely surrounded by bodies…” 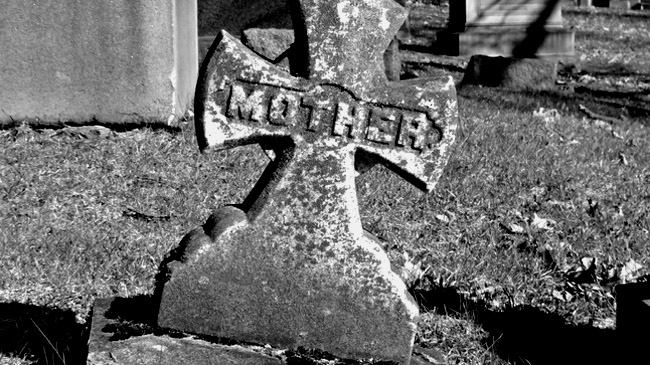 #3: “I used to do some odd jobs at the 12th century graveyard in my hometown,” wrote BoredCop. “12th century, as in the church and its surrounding graveyard had been in continuous use for at least that long. When you keep burying bodies in the same small patch of ground for that many centuries, eventually the soil has been turned over dozens of times and consists mainly of bone fragments. You can’t even plant flowers there without accidentally uncovering some teeth or finger bones or something, it’s nothing but fragmented skeletons all the way down under the thin turf. The “soil” sort of resembles seaside shellsand, except on closer examination all the light-colored bits are bone fragments rather than crushed seashells.”

#4: “So one night I was doing my rounds, and I had to go into the small mausoleum, had some of the richer families in the areas entombed within, and I had to go in, make sure all was neat and clean, standards had to be upheld for these uppity folks,” wrote Freddie30234. “So I approached, and right off the bat, something was off, the air was pretty damn cold, during the summer in Georgia, that was odd. Other, there was a light coming from the mausoleum, and as I approached, I heard voices, laughter? Laughter from a child, a little girl, I thought it was simply younger folks maybe? I haven’t seen anyone enter or leave the cemetery, and the laughter sounded young, however as I got closer the voices and laughter died, like almost instant. I pause. The light, I also noticed, had gone out. I call the lone security officer that does a few rounds on the lot, cuz I’m not gonna go in alone, and he comes, we will call him, Officer Friendly.

“When Officer Friendly arrives we both go inside, We see one of the doors to the entombed remains of a young girl, open…… nothing was disturbed within, but it was open, and a doll, lay on the stone beneath it, me and Officer Friendly do a small sweep, it was only one floor and one room, so it didnt take long. We close the door to the girls entombment, and we both leave, as we walk away, we get about 30 feet from the mausoleum, and then all of a sudden, boom, voices and laughter again. I jump, and Officer Friendly looks to me, looking pretty shaken, says to me “you hear it too?” We look back, and boom, lights back, laughter continuing. We dont go back and just book it, I found out the next morning, the door was open again, this time the doll was on the other side of the mausoleum from where we found it the night before. I resigned the next day, I’m good lol.” 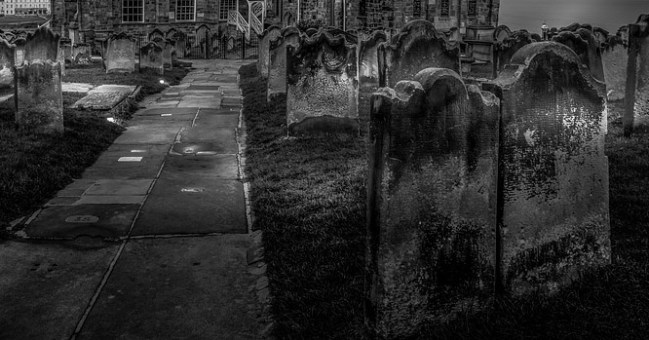 #5: “When I was in college I worked part time at a Jewish Cemetery in reception/office management,” wrote Pof_no. “The cemetery was closed from Friday afternoon through Saturday evening for Sabbath. We sometimes stayed a bit later in the office on Friday afternoons to get bills out or checks processed.

“We heard a loud commotion by the cemetery entrance which was locked and only staff could get in and out. The office manager went to see what was going on and made me come with her. We went down to the gate to find an older woman (probably around 70) dressed to the 9’s begging us to let her in. She kept saying she needed to get back. This was in the suburbs of NJ so you needed a car to get around but we didn’t see a car or anything, she was just there in this beautiful dress. We couldn’t open the gate without the cemetery manager, so we went to go get him. We brought him back to the gate and no one was there. We looked at video footage of the entrance and you could see us (the office manager and me) talking but there was no one on the other side of the gate. The cemetery manager thought we were trying to trick him.

“I swear to this day we saw a woman in a fancy dress outside that gate. There were multiple cameras and not a single one picked up anyone on the other side of the gate and you could see the whole gate. All you could see was us. I don’t know if it was a ghost or what. The office manager and I decided not to tell anyone else, but we would mention it to each other every once in a while.”

#6: “Here in Norway graves are protected by law for 20 years, but after that the spots can be ‘reused.’ Usually a grave is fine to reopen after 20 years – the body is supposed to be decomposed and pretty much gone. … Between the 50s and 80s it was common here to be buried in plastic, to minimise ‘smell and leakage,'” wrote ullabr. “I’m sure they thought it was a good idea back then, but once we started reusing graves in Norway we realised it is a curse. A lot of bodies are wrapped in plastic, and I’ve myself been part of what was supposed to be a burial at a reused site. The body was about 50 or 60 years old, and should be basically gone, but nope it was not, the plastic wrap it was covered by kept the body from decomposing, and it’s basically just been marinated it its own juices for 50/60 years. The smell was awful, the sight was even worse.” 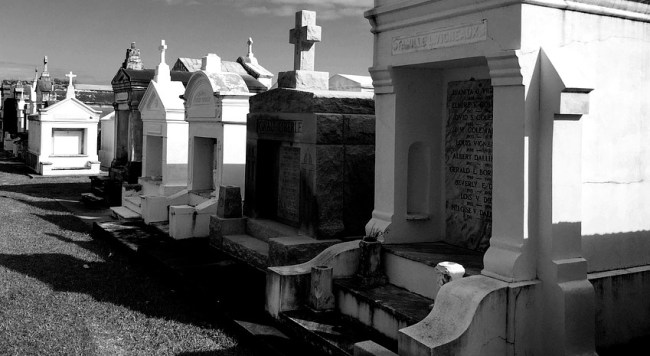 #7: “I worked for a county cemetery department years ago. We would go to all the cemeteries in the county and mow or just do basic upkeep,” wrote BrutalBob1384. “Occasionally people (mainly farmers) would stumble upon some headstones in a field or a stand of trees and we would come out and prod the ground with dowel rods to find more headstones and reestablish the cemetery.

“Soon after I started working there we got a tip about some headstones a farmer found while clearing out a path through some trees for easier access to his field. It turned out to be the oldest cemetery in the county dating back to the 1700’s.

#8: “I dug graves for six months. One afternoon we had to hand dig a hole in a older cemetery b/c we couldn’t run any heavy equipment over any of the older plots,” wrote MoreTorqueSteve. “It was super tough and took us a lot longer than usual. When we were finally close to be done, it was dark and hard to see. I remember my shovel hitting a brick of the neighboring plot (before cement casks), and a it coming loose. I swear to god I saw something move inside the small hole and practically jumped out of the grave. I got back in to finish the job, but was definitely spooked.”

Okay, I’m done. That’s enough creepiness for me for one day. Check out the rest of the tales, if you are so inclined, over at Reddit.