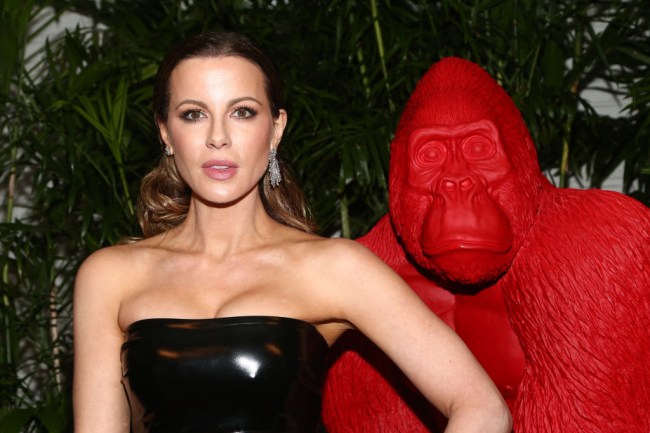 After Davidson’s stand-up comedy show in Los Angeles on Friday night, the 25-year-old SNL star left the Largo at the Coronet with the definitely doesn’t look 45-year-old Kate Beckinsale. The photos of the two celebrities holding hands fueled the flames that they are dating.

Davidson and Beckinsale reportedly went to his hotel in Santa Monica and “they arrived at the hotel hand-in-hand.” You know damn well Pete called TMZ and was like, “I’m leaving the Largo at the Coronet at 11:03 pm, make sure you’re there with cameras rolling, something important is gonna happen.”

RELATED: Based On The First Trailer, Kate Beckinsale’s Upcoming Series On Amazon Prime Looks Like A Must-Watch

This is why you need a famous girlfriend like Ariana Grande to spread rumors that you have a large penis and BDE. But don’t deny these big compliments like Pete did two weeks ago.

Three weeks ago, Beckinsale played off the rumors that she was dating the Saturday Night Live comedian.

A friendly piece of advice to Pete, definitely don’t challenge Kate to a sled push-off.

In related Pete Davidson news, the SNL comedian claims that he was purposely targeted by police in Syracuse, New York, because he is a big star. When asked about filming the upcoming movie Big Time Adolescence that was shot in Syracuse last summer, Davidson responded, “Never again, Syracuse.”

“It sucked… The whole town of Syracuse blows,” Davidson told Variety. “To be honest, they just found out I was there and tried to arrest me the entire time…There’s nothing going on there so they were hunting me down the entire time.”

Pete Davidson weighs in on filming in Syracuse, says cops were "hunting" him down to arrest him: "Never again, Syracuse" | #Sundance #VarietyStudio presented by @ATT pic.twitter.com/izgE5gw3C9

Around 4:30 a.m. on Saturday, August 11, 2018, Davidson was pulled over by Manilus Police for violating traffic laws in Fayetteville, New York. Davidson was not charged with any crimes but his friend and passenger at the time, Joseph “Joey” Gay Jr., was charged with a violation for unlawful possession of marijuana and a fourth-degree felony for possession of concentrated cannabis. Gay pleaded guilty to unlawful possession of marijuana in January and paid $225 in fines.

Manilus Police Captain Kevin Schafer denied the allegations and said, “When we stop a vehicle, we don’t know who’s in it.” Now, Onondaga County District Attorney William Fitzpatrick is calling for the police to reopen the case against Davidson.

“I just heard the comments of Pete Davidson,” Fitzpatrick said last Tuesday. “Not surprisingly, it was the first time I ever heard of Pete Davidson, and apparently he doesn’t like Syracuse. So I did a little background checking on him and, quite frankly, I’d be as likely to take tourism advice from him as I would marriage counseling from O.J. Simpson.”

“However, I am going to ask Manlius police to look into the charges that were brought against Mr. Davidson and see if they can’t be reopened,” the D.A. said. “And then we’ll see how much he really likes Syracuse. Stay classy, Syracuse.”

Manilus Police have yet to reopen a case against Davidson.