I, For One, Am Shocked That Pete Davidson Is Electing To Undergo Years Of Tattoo Removal 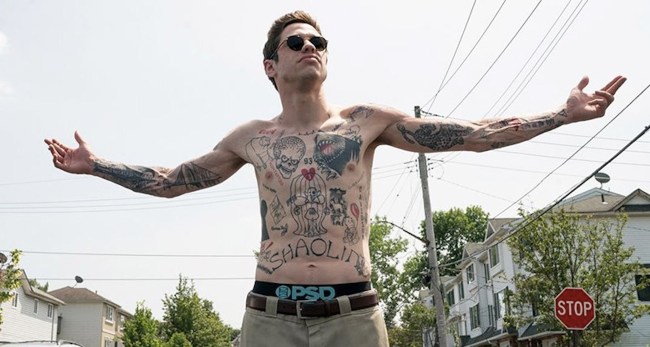 Man, just when you think you really know a guy, huh? And here I was, obviously quite foolishly, thinking that Pete Davidon’s dozens, if not hundreds of tattoos were works of art that he’d proudly cherish and carry with him for the rest of his life.

As for why Davidson is electing to undergo literal years of tattoo removal — other than the general embarrassment of bad ink, of course — the Saturday Night Live standout and King of Staten Island star says it’s because of how intensive his pre-film make-up routine has become:

“You have to get there [on set] three hours earlier to cover all your tattoos,” Davidson told Seth Meyers on Late Night in early May. “Because for some reason, people in movies, they don’t have that much.

Credit to Davidson, though, as he’s parlaying the painful experience into a marketing opportunity with smartwater:

“I’ve made a lot of questionable choices, and a couple of them need removing. But now I’m trying to make smarter choices, hydrating with smartwater and stuff like that,” Davidson says in the minute-long advertisement.

As for how long the process will take, Davidson says he’ll have to go under-the-laser for another two years:

“We’re shooting some stuff and it takes like a month for it to heal. But like it’s pretty much off this hand,” Davidson said, holding both hands up to the camera to show the faded ink. “I get my next treatment [in] like a month or so. They said by the time I’m 30, they should all be gone. So they got like two more years left of this.” [via https://people.com/style/pete-davidson-says-tattoo-removal-process-will-take-years/People]