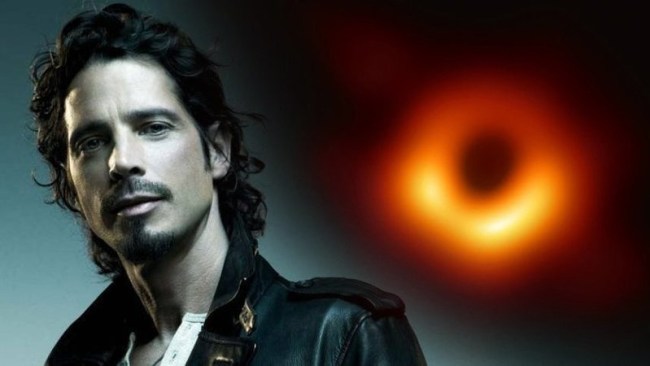 Last week humanity got its first glimpse at the daunting and eerily ominous center of a black hole. Now there is a petition to name the supermassive black hole after singer Chris Cornell. Black hole sun, won’t you come and make Chris Cornell your name.

The first photo of a black hole ever was revealed on Wednesday. The Event Horizon Telescope (EHT), which is composed of eight radio telescopes stationed on five continents, discovered the supermassive black hole is in the center of the Messier 87 (M87) galaxy. The black hole is 55 million light years from Earth and has a mass 6.5 billion times that of our sun.

This is M87* and this the first image of a black hole! Mass is 6.5 Billion suns within size of a solar system. Precious because real. Waited 25 years for this. Dark shadow is where light disappears in #eventhorizon. We see something never seen before. #blackhole #JustWow #EHT pic.twitter.com/3nCosTzyER

“Almost two years ago, we lost Chris Cornell. He was the lead singer for Soundgarden and Audioslave, and above all, the voice of an entire generation,” Jarrin wrote in the petition. “He was one of the most beloved figures not just in rock, but all of music, by people from all over the world. His music, his voice and his personality inspired, influenced, changed and even saved the lives of thousands of people.”

“Chris left a heavy legacy for a new generation of musicians who follow in his footsteps. His memory will remain forever alive in the hearts of all his family, friends, fans and all the people who love him, and his music will do the same in each record, song or video we play,” the petition titled “Name the black hole after Chris Cornell” states. “This would be a surreal and amazing way to honor his life and his contribution to music.”

Cornell’s biggest song is arguably Soundgarden’s 1994 song Black Hole Sun. The track from Soundgarden’s Superunknown album peaked at No. 1 on Billboard’s Mainstream Rock Songs chart in 1994 and remained on the chart for 26 weeks.

However, the petition might be too late because the black hole has been named “Powehi,” which is a Hawaiian name that means “embellished dark source of unending creation.” But what about Muse? Shouldn’t they get some consideration for their song Supermassive Black Hole?

In related black hole news, the internet shared wonderful black hole memes that ranged from cats to the Eye of Sauron from Lord of the Rings to bagels.

NSF: Amazing first photo of black hole! This changes everything!

This photo of the black hole is awesome, but wait… Enhance! Hmm, enhance! One more time, enhance! Whoa. The biggest Cinnamon Raisin Bagel in the world, and it's still hot! #EHT #EventHorizonTelescope pic.twitter.com/aPDVtLHF2u

I am sure the spatial resolution of the #blackhole images will get better in future. pic.twitter.com/uN9lmN9fGe

I made this thinking it would be funny but now I'm on the verge of a panic attack pic.twitter.com/oF17MOOBvt

This is the best blackhole meme so far #EHTblackhole pic.twitter.com/iw3rrDZDhL

RELATED: Astronomers Uncover Evidence That A Giant Ghost Planet May Be Hidden In Our Solar System