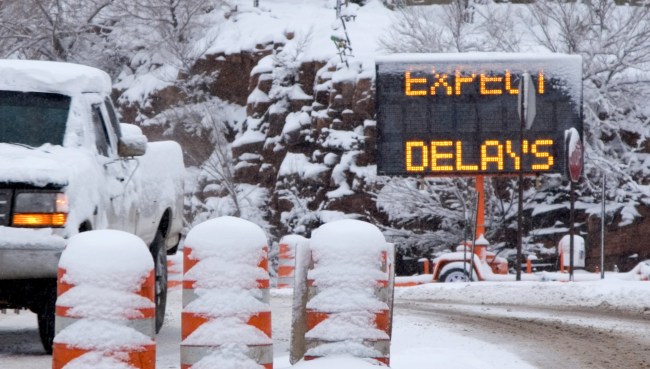 Here’s something you don’t see every day, or, ever. Thank God. A driver in Wisconsin went for the ride of his life when his pickup truck skidded on some snow and ice and launched itself over the barrier wall of an overpass on I-94 in West Allis.

Oh yeah, that barrier wall he jumped? It was about 70 feet in the air over another highway. 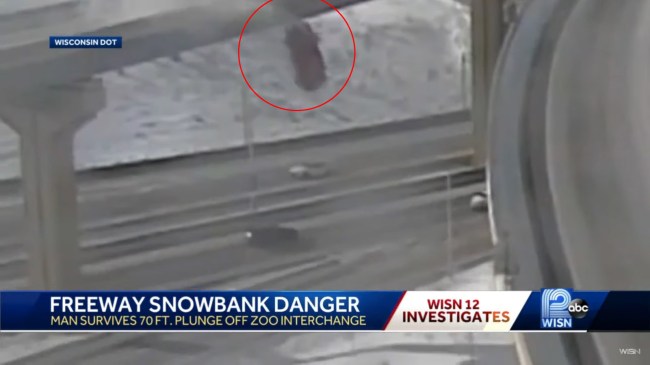 According to WISN News…

The Milwaukee County Sheriff’s Office said a pickup truck traveling on I-94 when the driver skidded off the eastbound to the southbound ramp.

The video appears to show the truck hitting a snowbank on the right shoulder seconds before the fall. The driver lost control and went over the barrier wall. He then plunged 70 feet down onto the westbound I-94 distress lane.

By miracle of all miracles, the truck somehow managed to land on its tires and stayed upright.

When police arrived on the scene of the accident, the driver was being tended to by two passersby and was both conscious and breathing.

“The vehicle traveled up a snowbank, proceeded over the barrier wall, and descended 70 feet down onto the westbound I-94 distress lane,” reported the Milwaukee County Sheriff’s Office.

The driver’s sister spoke to WISN News and posted on Facebook that he had suffered a broken back, neck and legs, and has a long recovery ahead, but at least he will recover from the harrowing fall.

“The biggest risk with that is the melting and the freezing creates sort of a ramp, a natural ramp,” said Milwaukee County’s Director of Highways and Maintenance Eddie Santiago.

Based on the video below, that seems like a problem they might want to get solved and soon.