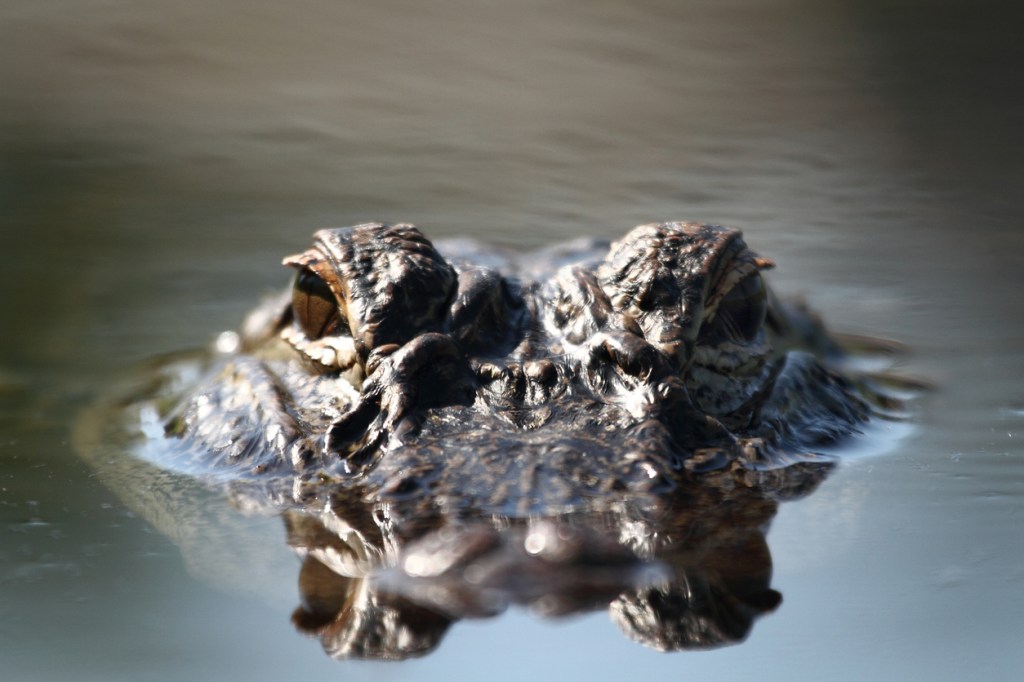 There’s no way of knowing the exact number of alligators there are in Florida but the best estimates claim there are over 1.3 million in the Sunshine State. Gators are found in all 67 counties of Florida. And it’s a good rule of thumb to assume there’s an alligator in every lake and if there’s not one in the lake there will be soon.

Florida has a population of well over 21 million residents and humans greatly outnumber alligators. Despite the 16-to-1 ratio of humans to gators, there only an average of 7 unprovoked attacks per year in Florida. The numbers don’t like, gators really don’t pose a huge threat to people as long as they’re given their space.

Issues between humans and alligators arise when one of hte parties steps out of line and crosses into the other’s territory. Case in point, this 6-foot gator below named ‘Gary the Gator’ who wandered onto the campus of Michigan Avenue Elementary School in St Cloud, Florida. Then St. Cloud officers were called in to remove the alligator despite ‘dinosaur removal’ not really being part of the job description.

St. Cloud police officer Stephen Burrows told FOX 35 Orlando “Toughest part was making sure everyone was safe. I really wasn’t scared. I knew there was a job that needed to be done, so I just did it – captured the gator with a catchpole, taped his mouth shut.”

I know this is going to sound a little psychotic but I’d absolutely love it if someone would ask me to remove a nuisanc alligator. To me, this would be fun. And a 5 to 6′ gator seems totally manageable. I wouldn’t want to start with anything in the 10′ range but give me that lasso and some duct tape and let me figure it out. Heck, I might even pay for this opportunity as an activity on a bachelor party.

Additional Photos Of Gary The Gator Being Removed

And here’s Gary the Alligator after he was subdued, hog tied, and put in the back of a pickup truck sohe could be safely relocated to an area away from the elementary school.

The St. Clouud Police Department’s Facebook caption reads “Gary the Gator was found trespassing on school grounds this morning. SRO Burrows took Gary into custody before he was bonded out and released with strict instructions to never return to school property again!”

I had a VERY similar experience to this in high school. We had a small-ish lake on the grounds of my high school and one day I left my AP Lit class to use the restroom and walked in to find a dang alligator in the men’s bathroom. It was small, probably about 4-feet, and the cops weren’t called. But believe me when I tell you the literal last thing I ever expected to see in the bathroom of my high school as an alligator!

Gators are also sneakily good at climbing fences and sneaking into tiny spaces. Check out this one who recently broke into a house on a construction site and had to be removed:

When Can Gators Legally Be Removed?

An alligator isn’t considered a ‘nuiscance’ just for existing. There are generally two piece of criteria that need to be met for a gator to be classified as a nusicance. (1) The alligator is 4-feet in length (or longer) and (2) it’s believed to pose a threat to property, people, or pets.

Clearly, Gary the Gator was a nuisance as he’s 6′ long and growing AND was blocking the entrance to an elementary school’s cafeteria and preventing kids from eating lunch. My first thought was actually ‘how miserable were those teachers when the kids couldn’t eat and all got cranky?’

Alligators Are The Ultimate WILD CARDS In Nature

There’s really no telling of what might happen alligators are backed into a corner. They are wild animals and not accustomed to being cooped up in a house like that. Nor are they used to driving in cars like this one who escaped from a van and got loose in traffic recently.

And the bigger the gator the more surprising its actions can be. NOBODY expects to find an alligator chilling in front of a cafeteria. They’re expected to live in lakes and ponds, not new construction luxury homes. Nor does anyone expect to find a 3-footed gator absolutely dominating a golf course!