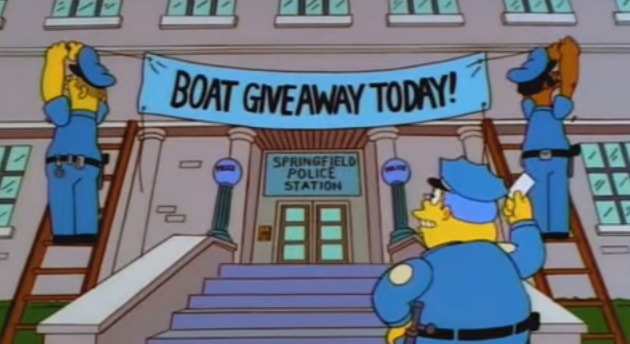 The Simpsons are known for predicting peculiar events including Disney buying Fox, Super Bowl matchups, Super Bowl halftime shows, and a Trump presidency. Now they either prognosticated police tactics in 2017 or the police are using silly gags from The Simpsons to arrest criminals.

We take you to Yorkshire, UK, where the local police department is taking their sting operation cues from the Springfield Police Department. The South Yorkshire Police tricked 21 criminals into getting arrested with the promise of free shit. Police sent cards from a fake company to known felons offering them free champagne, wine, Christmas pudding, and other goodies in a sting called “Operation Holly.” Then 21 of the criminals, who were charged with crimes such as burglary, assault, fraud, drink-driving, dangerous driving, and drug-related offenses, attempted to collect their freebies, but were met by local police instead. Not one spoonful of Christmas pudding was to be had, only arrest warrants.

“It’s encouraging that our innovative approach has yielded positive results and we will continue to explore new avenues for apprehending those wanted, which impacts upon the victims of crime. Sending officers to addresses where wanted people no longer reside is also a drain on valuable police resources,” said Lee Berry, Temporary Detective Chief Inspector.

The South Yorkshire Police may have stolen the idea from the eighth episode of The Simpsons‘ ninth season titled “Lisa the Sceptic.” In the episode from November 23, 1997, Chief Wiggum and the Springfield Police offered a free motorboat as a prize for a raffle to every scofflaw in Springfield, but it was all a clever ruse. The Los Angeles Police also used a Simpsons-inspired caper to catch criminals back in 2009.

Proving once again, Simpsons did it.