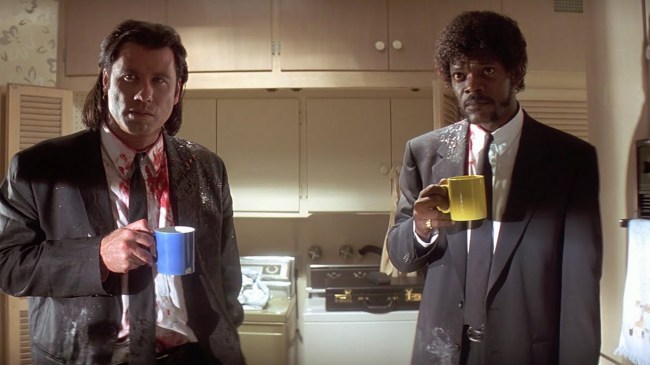 Samuel L. Jackson contends that Pulp Fiction is the “coolest movie to ever be made” and who is anybody to argue. But Samuel L. Jackson also says that he was almost not in Pulp Fiction despite Quentin Tarantino telling him that he wrote the role of Jules Winnfield specifically for Jackson, which might be a big fat lie.

While Quentin Tarantino was writing the script for Pulp Fiction, he pictured in his head who would be the perfect actor for each now-iconic role. This list shows that Quentin really, really wanted Gary Oldman in the movie and envisioned him as a number of key characters including Pumpkin, Vincent Vega, and Lance. Who could blame Tarantino since Oldman has put forth an incredible performance as drug dealer Drexl Spivey in Quentin’s 1993 True Romance. Other big-time Hollywood actors Quentin wanted for Pulp Fiction include Nic Cage, Johnny Depp, Denzel Washington, Christian Slater, Marisa Tomei, Michael Keaton, Pam Grier, and Bridgit Fonda. Tarantino thought Samuel was an option to play Lance, which went to Eric Stoltz.

In this AFI interview with Jackson, Samuel said that Tarantino had written the role of Jules Winnfield specifically for Jackson.

However, in this Tarantino interview, Quentin says that he wrote the role of Jules Winnfield for Laurence Fishburne.

RELATED: You Can Buy Infamous House From ‘Pulp Fiction’ For $1.4 Million *Dead Body Not Included

Whoever Quentin wrote the role for, it was almost stolen by someone Tarantino would have never imagined. One of Jackson’s Pulp Fiction co-stars nearly stole the Jules Winnfield role right from under Samuel.

“(Tarantino) theoretically said he wrote it for me then he gave it to me… then some other guy came in and they thought he was brilliant,” Jackson told LadBible. “So then it was, ‘We’re thinking about casting this other guy now so you need to come in and audition.’ It became an acting contest.”

“I ended up auditioning for it. I wasn’t supposed to,” Jackson said. “Who was it? Another actor. Who didn’t get the job. He’s actually in the movie though. He’s in the movie…(grins).” Jackson doesn’t reveal who the Pulp Fiction actor who nearly took his iconic role was in this interview, but there are receipts.

Actor Paul Calderón put on such an amazing first audition that Tarantino was seriously contemplating ditching Samuel L. Jackson as Jules. Jackson had to fly to Los Angeles to save his spot in the legendary movie. “I sort of was angry, pissed, tired,” Jackson told Vanity Fair.

Jackson tells a story of how he was angry and hungry, which is never a good combination, so he got a tasty burger on the way to the studio because everybody knows that hamburgers are the cornerstone of any nutritious breakfast (He doesn’t say if it was from Big Kahuna Burger or not). “When they came back, a line producer or somebody who was with them said, ‘I love your work, Mr. Fishburne,’” Jackson said of the person mistaking him for Laurence Fishburne. “It was like a slow burn. He doesn’t know who I am? I was kind of like, F*ck it. At that point I really didn’t care.”

RELATED: Here’s How To Make The Big Kahuna Burger From ‘Pulp Fiction’ And I Guarantee It Is A TASTY Burger

Richard Gladstein, then head of production at Miramax, vividly remembers the great vengeance and furious anger that Jackson had in his audition.

“In comes Sam with a burger in his hand and a drink in the other hand and stinking like fast food. Me and Quentin and Lawrence were sitting on the couch, and he walked in and just started sipping that shake and biting that burger and looking at all of us. I was scared shitless. I thought that this guy was going to shoot a gun right through my head. His eyes were popping out of his head. And he just stole the part.”

What a springboard Pulp Fiction was for Jackson as he would star in another movie with Bruce Willis, Die Hard with a Vengeance, enjoy incredible Hollywood success by having 182 acting credits and starring in movies such as The Long Kiss Goodnight, Time to Kill, Jackie Brown, Kill Bill: Vol. 2, and become Mace Windu in Star Wars and Nick Fury in Avengers. No offense to Paul Calderon, he’s had a wonderful acting career with roles on Boardwalk Empire and Fear the Walking Dead, but nothing like Samuel L. Jackson’s legacy, and that’s nothing to be down about.

There’s no possible way Calderon or Fishburne could have played a better Jules Winnfield.

RELATED: Samuel L. Jackson Shared The Top 5 Characters He’s Ever Played And Nick Fury Is Only #5