WATCH: 10-Foot Python Emerging From Shelf Frightens No One In Australian Grocery Store 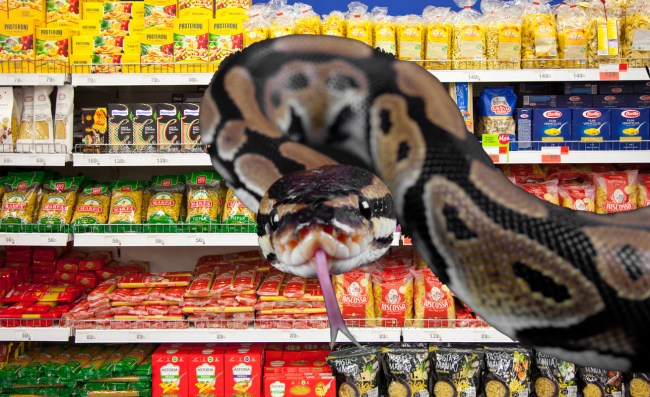 The best thing to ever happen to Australia is Florida, because without it, the world would be forced to recognize just how bizarre things get in the land down under.

These headlines are pulled from the last six months alone

Animals are continuing their Aussie takeover, evident in this 10-foot python finding a home in the spice aisle of the Sydney supermarket Woolworths.

Helaina Alati was browsing the spice aisle when she came face-to-face with the cold-blooded diamond python.

As Australian as it can be. 3m long Python found in the herbsss and ssspices Isle in a Woolworths supermarket in Sydney. pic.twitter.com/4DZitfn47A

“I was in the spice aisle just looking for something to put on my chicken that night so I didn’t initially see it because it was curled up way back behind the little jars of spices,” Alati said on Wednesday, per the South China Morning Post. “I kind of turned to my right and it poked its head out.”

Just when you thought the story couldn’t get more Australian, Alati didn’t panic because she just happens to be a trained snake catcher, which I assume 95% of the Australian population is by birthright.

“I said: ‘I’ll go get my snake bag.’ I think they thought I was a bit crazy to be honest. I don’t think they knew what to say when I said there’s a 10-foot python in your aisle.”

“I knew straight away it was non-venomous, it was non-aggressive, it wasn’t going to be a problem for anyone,” Alati said.

“If anything, I think everyone was a little bit excited. We’re all in lockdown so it was kind of like the most excitement we’ve had for a while,” she added.

Just listen to this Australian news reporter deliver the news with the pride reserved for a World Cup win.

A sneaky snake has given shoppers a shock at a Sydney supermarket. The diamond python was seen slithering along the spice rack at Woolworths yesterday. https://t.co/5zYfOfohG3 #7NEWS pic.twitter.com/zmhVXwdFZc

In any other developed country in the world, that supermarket would’ve been burned to the ground with everything in it. In Australia, the python is getting promoted to assistant manager.