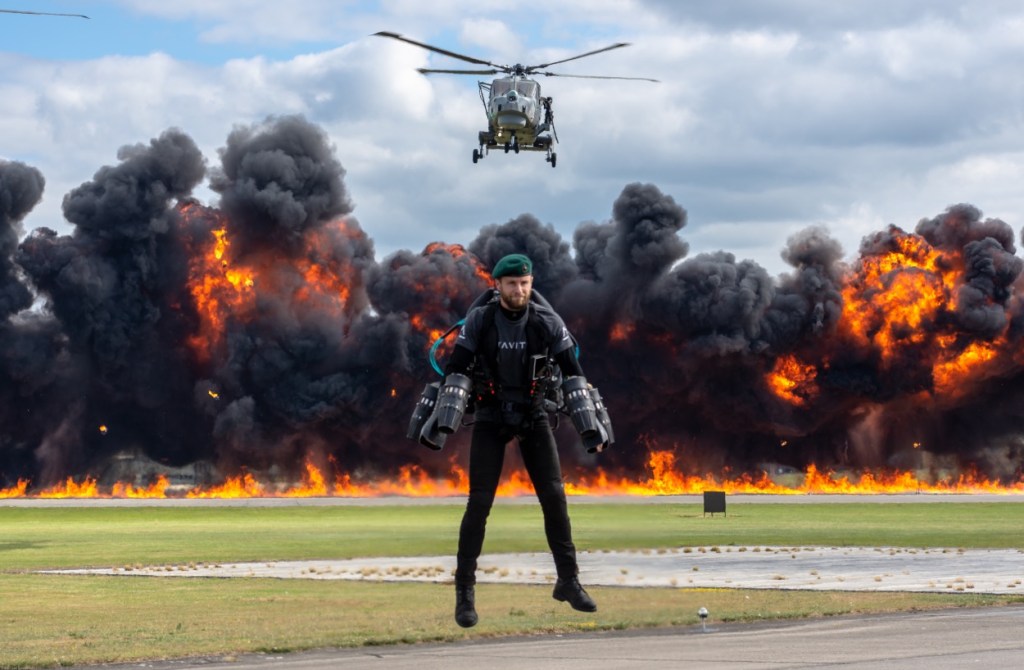 The future is now. After years of development, these futuristic real-life ‘Iron Man’ jet suits from Gravity Industries will debut in the field. Plans to debut a “Jet Suit-enabled paramedic service” were set in motion back in 2020 but delayed due to unforeseen circumstances. But the time is near, the mission’s clear, it’s later than we think. And Before they slip into the night, they’ll want something to drink (sorry, that was for the five Phish fans out there reading this).

We most recently covered the Gravity Industries Jet Suits here on BroBible back in May of 2021.

At that point, the company was showcasing the military application of their futuristic jet suits by having a trained pilot take off from one ship and land on another. It’s truly surreal footage and one of the biggest ‘the future is now’ moments I’ve witnessed. Now, Gravity Industries is partnering with the Great North Air Ambulance Service to deploy their jet suits in the field.

The Great North Air Ambulance Service (GNAAS) has targeted England’s Lake District as the ideal location to test out these Iron Man suits. One GNAAS paramedic has just completed extensive training with the Gravity Industries Jet Suits and will now be able to deliver triage in the field in locations that are incredibly difficult to reach with conventional methods.

The GNAAS released this statement in a press release about why the Lake District was chosen:

Andy Mawson, Director of Operations at GNAAS, said: “We think the Jet Suit paramedic will speed up the response to some hard to access patients in the Lake District, and allow us to reach more patients. But in order to know for sure, we are putting it to the test.

“The most recent trials in the area, held at the start of the month, were a great success and showed how far and how quickly the Jet Suit can reach otherwise inaccessible locations. Thanks to Ørsted, this incredible dream could become a reality.”

It isn’t just that some locations are impossible to reach, weather is arguably a more important factor with regard to the difficulty of rescue missions. Parts of England get battered with gale-force winds year-round. So the Lake District was chosen because of its inhospitable weather and remoteness. But this mean they needed to test out the jet packs in windy conditions.

Here are some recent videos from the Gravity Industries YouTube channel of the jet suit in action:

How impactful will jet suits be in the field?

According to an article on Interesting Engineering, these suits will drastically speed up recovery time. They write that the average time it takes for a helicopter to reach a patient in the Lake District National park is between 25 and 30 minutes. These suits will lower that time to as fast as 90 seconds. This could 100% save lives in emergency situations.

This quote from Richard Browning who is the Founder and Chief Test Pilot at Gravity Industries is pretty mind-blowing. He discusses just how powerful their jet suits are:

Our drive for creating the Suit came from wanting to challenge what seemed like the impossible and to now see it being used for areas of Special Forces mobility and First Response Search & Rescue, it’s very exciting. We’re enjoying working in a new sector and helping the front line workers in clean energy. The Jet Suit produces up to 144kg of thrust; the thrust to weight ratio works out to be greater than any known Jet Fighter we are aware of.’

As far as I’m concerned, this is a real-life Iron Man suit. They are as futuristic as jet pack suits can possibly get. But it’s worth considering this is just the tip of the iceberg. Once they deploy these into the field they’ll be able to accumulate data on how to tweak the suit and what needs changing. It’s not unreasonable to think that within the next decade these suits could revolutionize rescue missions.

For more on this, you can click the link above to read the GNAAS press release!