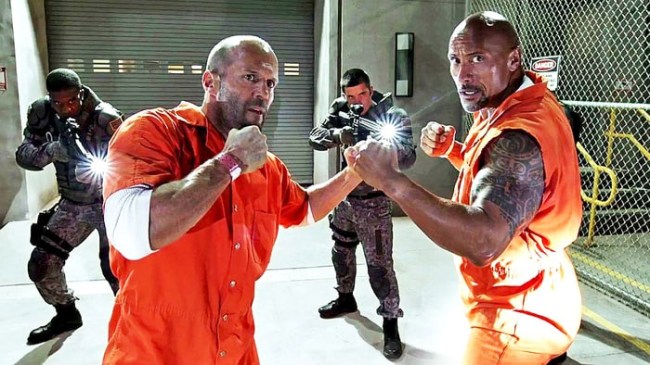 Dwayne Johnson and Jason Statham’s much-anticipated spin-off movie for the Fast and Furious franchise barely announced its release date before Tyrese (yes, again) and Vin Diesel threw shade at it on social media.

Before we get into all that, here’s what we know about The Rock and Statham’s movie so far, thanks to Variety…

Johnson and Statham will reprise their roles of special agent Hobbs and criminal mastermind Deckard Shaw, who team up on an undisclosed mission. Early on in the development of the story, sources said the two would hunt down Charlize Theron’s villainous Cypher after the events of “The Fate of the Furious,” but insiders say that it’s currently unknown whether or not she’s involved.

The film’s release date will be July 26, 2019 (which is why Fast 9 got pushed back, triggering Tyrese). Chris Morgan, who wrote The Fast and the Furious: Tokyo Drift, Fast & Furious, Fast Five, Fast & Furious 6 and Furious 7 will be writing the script, while sources say Shane Black (Iron Man 3) could end up being the director.

Now then, back to the never-ending beef between The Rock and certain members of the Fast and Furious cast.

We all know that Johnson and Diesel had a falling out during the filming of Fast 8, reportedly having to be kept apart during the press tour after The Rock called someone (Vin Diesel, probably) a “candy ass.”

Supposedly, that was all settled, but now it appears, with a lot of help from Tyrese, to have flared up again.

In August, Tyrese ripped The Rock over doing the spin-off movie and for not returning his texts (seriously).

Then earlier this week when the release date for Fast 9 was announced and instead of it coming out in two years, as the last five movies had, this one was being delayed until 2020.

Tyrese took great umbrage with a giant source of his income being pushed back to accommodate The Rock and blasted him on social media.

Writing on Instagram, Tyrese said, “#PSA Congratulations to @TheRock and your brother in law aka 7 bucks producing partner @hhgarcia41 for making the fast and the furious franchise about YOU – And like you, DJ even if they call I will not be deleting this post – Gn folks see you in 2020 April #FastFamily right? Nah….. it’s about #TeamDewayne #3yrs will it be worth the wait? #NoShaw just Hobbs will this be another #BayWatch? Guys guys just relax I’m just a passionate film critic.”

On Thursday, Johnson and Statham’s spin-off got it’s official release date, and yep, there was Tyrese again, tearing into The Rock on Instagram.

“Diversity, love, multi ethnic worldwide multi generational, United Nations, One Race, Fast Family…… Until Dewayne showed up I guess this whole time he had a problem cause he wasn’t the ONLY ONE on the movie poster……….. I guess dreams do come true congratulations to @hhgarcia41 and @therock you guys are just amazing you really broke up the #FastFamily I tried to warn you guys… You thought I was hating…… I was simply fighting to keep the family together what makes us great is when you see us all TOGETHER we don’t fly solo….. #MyLastPost today….. I got 3 years of venting on this clown – They offered but YOU didn’t have to agree with a solo #HobbsMovie #OriginalFastFamily we salute you and stand on your shoulders #VinDiesel #PaulWalker #RobCohen #RomanTej were offered a spin off we TURNED IT DOWN!!!”

Vin Diesel, another one of The Rock’s frenemies, was a little more low key with his shade…

Tyrese took it from there…

“#Repost #SwipeLeft – @VinDiesel – Never confuse determination with desperation….. What’s understood don’t have to be explained…… 44 million just got the memo…. Although it appears to be…. I’ve never been in this alone…….. #PerceptionVsReality #FastFamily like I said we don’t fly solo. President Obama’s integrity teachings is of a man who makes everyone feel like they MATTER…..”

When you do swipe left it shows a comment that Tyrese copied saying that everyone else declined a spin-off, that The Rock was putting everyone else’s income on hold, and that Johnson did it all behind their backs.

Sheesh, what a dysfunctional “family.” The making of Fast 9 should be fun though.