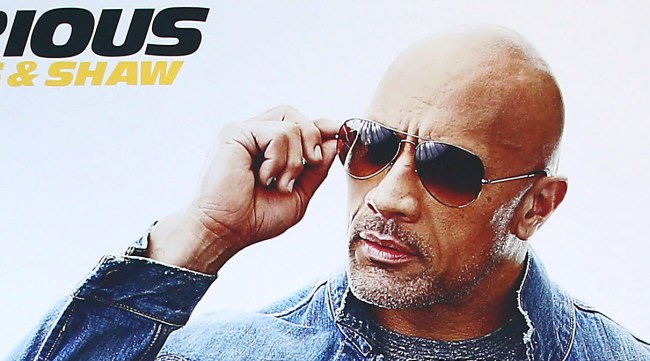 If you are going to get into a war of words with someone, just about the last person in the world you want to do it with is Dwayne “The Rock” Johnson – something that Kevin Hart keeps finding out over and over again.

After years of being the most loquacious men on the WWE roster, The Rock will lay a verbal beatdown on anyone who crosses him and for the most part there’s nothing that person can do about it.

This is a lesson that Fast and Furious star Tyrese Gibson just can’t seem to get through his head.

Ever since The Rock called some of his Fast 8 co-stars “chicken sh*t” and “candy asses” and then went on to sign his own deal for a Fast and Furious spinoff, Tyrese has been going HAM at Johnson for what he perceives as a major slight and disrespect for the film franchise.

Gibson has blamed The Rock for everything from Fast and Furious 9 being delayed until 2020 to his money and family problems.

Following the release of Hobbs & Shaw, Tyrese was back at it again, going at The Rock for what Gibson perceived to be a poor opening weekend for the spin-off.

According to Deadline, Hobbs & Shaw has now made $333 million globally. The movie Tyrese used as comparison in putting down Hobbs & Shaw, The Fast and the Furious: Tokyo Drift made a grand total of $158.5 million worldwide.

Not too bad of WEEK 1 box office business.
Thanks everyone around the world for having a great time and supporting our little spin-off known as @HobbsAndShaw. @SevenBucksProd https://t.co/O7LzS4TGCm

None of this was lost on The Rock as he issued a very subtle, but well-placed shot at Tyrese in a tweet about the success of the Fast & Furious spinoff.

“Thank you everyone for makin’ this an exciting first week of box office for our lil’ spin-off @hobbsandshaw. #1 movie and $333M worldwide, ain’t too shabby. And remember, the best way to shut the mouth of a 🤡 is to flex with success and a smile,” Johnson tweeted.

Thank you everyone for makin’ this an exciting first week of box office for our lil’ spin-off @hobbsandshaw.
#1 movie and $333M worldwide, ain’t too shabby.
And remember, the best way to shut the mouth of a 🤡 is to flex with success and a smile.
😉💪🏾💀@sevenbucksprod pic.twitter.com/rxYtNzmFL7

There is literally no way that wasn’t directed at Tyrese (and perhaps Vin Diesel as well).

And it’s only going to get worse for Gibson and the Fast and Furious “Family” as Hobbs & Shaw opens in South Korea, China, and Greece later this month.