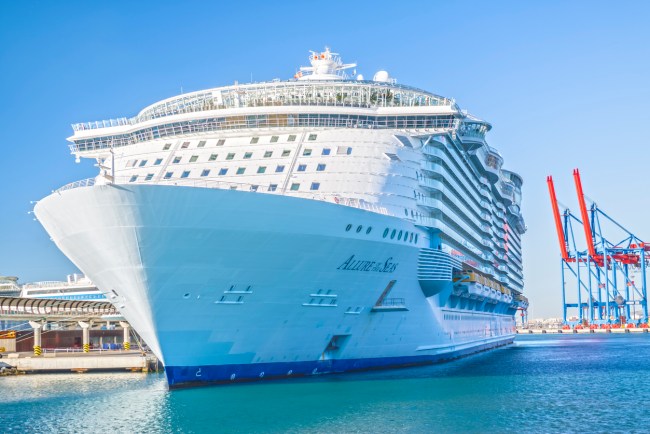 People are still subscribing to the “do it for the Gram” mantra. Even if it means posing in dangerous situations. The latest example of people going too far just for approval from strangers on social media is a woman standing on the wrong side of the balcony on a cruise ship.

A Royal Caribbean passenger has been banned for life from the cruise line after snapping a perilous photo. The woman was caught while taking a Caribbean vacation on the Allure of the Seas cruise ship that can accommodate 5,400 passengers.

The woman was wearing a swimsuit, and she climbed over the balcony railing of her stateroom. A fellow Royal Caribbean passenger named Peter Blosic saw the woman posing, took her photo, and alerted the ship’s crew. The woman was in a blue bathing suit and was nearly hanging off her balcony in the forward part of the vessel, two decks above the bridge on the starboard side.

A woman climbed over the railing on a cruise ship, while it was sailing in the Caribbean, to pose for a selfie. She was removed from the ship at the next port and banned for life. https://t.co/F7ARSfjhkP pic.twitter.com/SCSbdrOt0H

“Just witnessed this on Allure. What an absolute IDIOT. You cannot fall off of a ship unless you are acting like a moron!” Blosic wrote online.

“Earlier this week on the Allure of the Seas a guest was observed recklessly and dangerously posing for a photo by standing on her stateroom balcony railing with the help of her companion,” Royal Caribbean said in a statement. With one wrong step or a strong gust of wind, the woman could have fallen overboard the 225,282 gross tons cruise ship with 17 decks.

BANNED FOR LIFE: A woman can no longer be a passenger on Royal Carribean cruises after attempting to take a selfie while hanging over a railing. https://t.co/ClbICYQOnu

Authorities on the Allure of the Seas cruise ship were not pleased with the dangerous selfie and forced the passenger to leave the ship once they got into the next port. Then Royal Caribbean handed down a lifetime ban to the thrill-seeking selfie taker.

“Security was notified and the guests were later debarked in Falmouth, Jamaica as a result of their actions and are now banned for life from sailing with Royal Caribbean,” the cruise line said.

RELATED: Do It For The Gram: Influencer Travel Couple Posts Another ‘Dangerous’ Instagram Stunt Photo That Makes People Nervous

The Instagram-loving passenger was kicked off the cruise ship on October 16, only three days into her seven-day western Caribbean cruise that departed from Fort Lauderdale, Florida.

Royal Caribbean’s guest policies state: “Sitting, standing, laying or climbing on, over or across any exterior or interior railings or other protective barriers, or tampering with ship’s equipment, facilities or systems designed for guest safety is not permitted.”

RELATED: Woman Climbs Into Lion Enclosure At Bronx Zoo, Shares Videos On Instagram – ‘I Really Have No Fear’