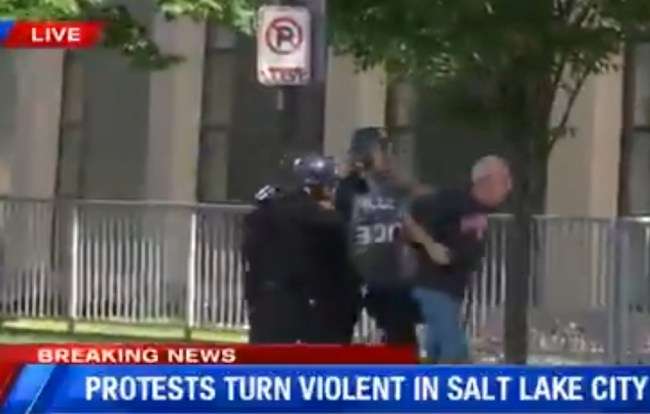 Anyone who went to bed early on Saturday night, or just stayed away from social media, is waking up to some insanely violent events across the U.S.

Demonstrations across the country again devolved into unrest, a day after a Minneapolis police Derek Chauvin was arrested and charged with the third-degree murder and manslaughter of George Floyd.

Just a quick recap of some of the more bizarre events across the country:

But perhaps the most dishearting and troubling video and story to emerge from the night of unrest happened in Salt Lake City.

Captured by ABC4, this video shows an elderly man taking videos and photos of the riot police.

Unable to physically move fast enough for the police, the elderly man with a can is shoved repeatedly from behind until he eventually loses his balance and falls to the ground.

Salt Lake City cops shove down an elderly man with a cane for the crime of standing along the street: pic.twitter.com/PCLkHqQtJg

Thousands gathered near the Salt Lake Library and Salt Lake Police Department in a peaceful protest earlier in the day, but tensions escalated later in the afternoon.

The National Guard was called into Salt Lake City, and an 8pm curfew was enforced.

Here’s a complete recap of all the protests and rioting across the country.