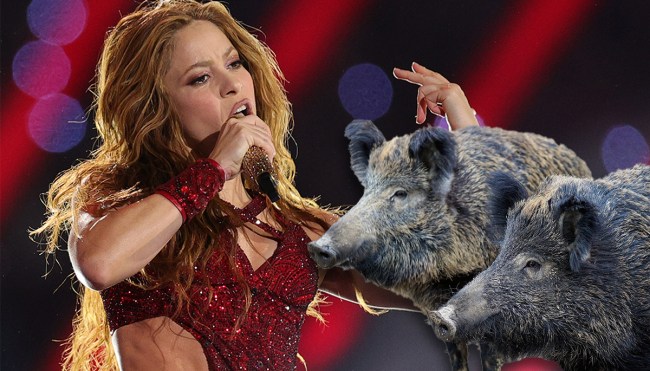 One of the best parts about writing things on the internet is that you never know when you’re going to be presented with the opportunity to write about the kind of story you couldn’t concoct in your wildest dreams, which is exactly what happened at the end of September after I stumbled across some news concerning Shakira getting mugged by wild boars.

As I mentioned at the time, anyone who’s familiar with the legendary “30-50 Feral Hogs” tweet knows that the behavior of untamed swine is no laughing matter. For decades, wild boars had the luxury of being primarily associated with an animated warthog singing “Hakuna Matata,” but they haven’t done themselves any favors in recent years by routinely finding themselves at the center of stories like the one that was shared by the Colombian singing sensation.

In fairness, no one has talked to the boars who attacked Shakira and her son while they were attempting to enjoy a day in a park in Barcelona. However, barring some revolutionary advances in the field of technology featured in Up, we’re never going to get their side of the story.

Thankfully, we do have some new details about the incident courtesy of the high-profile victim, as Shakira shared some more insight into what went down during a recent interview with Glamour—including a key piece of information that may explain why she was targeted in the first place:

“I was taking my son, Milan, for a walk in the park and I got him a little ice cream. We sat on one of those park benches and we were just minding our own business. And then two huge wild boars came from the back and ambushed [us] and took my purse!

And I was like, “Oh, my God! Oh, my God!” and screaming, because they were taking it away, with my phone in it, my car keys, everything! Like they could understand me! And people were just watching and they weren’t doing anything!

They started digging inside my purse… Obviously my son’s sandwich was inside the purse, so that’s why they were so interested. So they took the sandwich and walked away and left my purse. It was wild.”