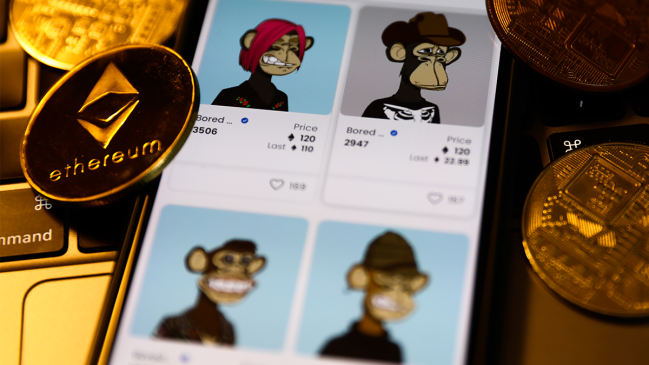 It’s been around two years since “non-fungible tokens” became the hottest new trend in the internet streets thanks in no small part to the many crypto evangelists who positioned them as The Next Big Thing. NFTs were met with skepticism by people who remembered what happened when another blockchain-based asset became all the rage in 2017, but that didn’t stop plenty of others from leaping on the bandwagon and dropping a fairly staggering amount to scoop up the digital rights to popular memes and other so-called virtual “assets.”

Evidence that suggested the NFT Bubble had burst about as quickly as it had formed emerged as early as the spring of 2021. However, that wasn’t enough to dissuade the many believers who continued to pour money into the space—as well as a number of celebrities who opted to get in on the action.

It’s hard to think of any NFT project that was more notable (or more perplexing) than Bored Ape Yacht Club, the organization comprised of “members” who earned admission by dropping a laughable amount of money on JPEGs of cartoon monkeys.

A major reason BAYC was able to drum up as much hype as it did was the many celebs who got in on the action, as it amassed a star-studded membership list that included notable names like Snoop Dogg (who incorporated his Bored Ape into a music video with Eminem), Seth Green (who wanted his Bored Ape to star in a TV show before it was stolen by a hacker), and Jimmy Fallon (who fawned over Bored Apes with Paris Hilton in a baffling exchange that arguably marked the moment the NFTs jumped the shark).

You had to be pretty gullible to think that was an entirely organic movement. There were undoubtedly some high-profile adopters who decided to buy Bored Apes on their own, but it seemed like there was a very good chance Yuga Labs (the company behind BAYC) had orchestrated a covert marketing campaign with the help of the high-profile ambassadors who were paid to promote the project.

According to Billboard, that alleged strategy serves as the basis for a class-action lawsuit that was filed in federal court in California on Tuesday, which accuses Yuga Labs and the array of famous people listed as defendants of taking part in a “vast scheme” that involved using “manufactured celebrity endorsements and misleading promotions” to create “drastically inflated prices”

The lawsuit largely revolves around the roster of talent signed with Los Angeles-based manager Guy Oseary, who is painted as the person who played the primary role in the plan outlined in the complaint. However, it also accuses a number of his clients of engaging in the alleged “conspiracy” by failing to disclose their involvement, as Fallon and Snoop are named alongside other big names including Justin Bieber, Steph Curry, Gwyneth Paltrow, The Weeknd, Serena Williams, Kevin Hart, and Madonna.

It should go without saying that simply being named in a lawsuit is not indicative of guilt, and the allegations remain exactly that pending a definitive court ruling stating otherwise (a representative for Yuga Labs provided BroBible with the following statement: “In our view, these claims are opportunistic and parasitic. We strongly believe that they are without merit, and look forward to proving as much”).

With that said, you have to imagine Curry is less than thrilled about being implicated in yet another crypto-adjacent investigation just a couple of weeks after the FTX collapse—just like it’s safe to assume Bieber is less than thrilled with having insult added to injury based on the current value of the Bored Ape he supposedly purchased for $1.3 million less than a year ago.