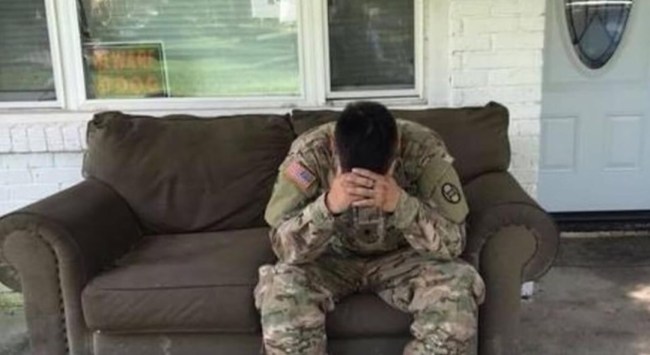 Hurricane Florence ravaged North Carolina and besieged the area with an expected $38 billion in damages. A soldier was ordered into action to assist the recovery and when he returned he discovered his home had been looted while he was helping his fellow North Carolinians. But the big-hearted man was not about to let the depravity of others contaminate his soul.

Last month, National Guardsman and Army medic Luis Ocampo left his home in Charlotte to help victims of Hurricane Florence in New Bern, N.C., a riverfront city that was devastated by the storm. Ocampo was away from his house for 10 days as he assisted the relief effort in New Bern. The area was annihilated by the high winds and heavy rain that dumped tens of inches on the town and caused massive flooding as well as raising water levels up to 10 feet. Up to 300 people in New Bern needed to be rescued from the dangerous waters.

Hurricane Florence is thrashing the Carolina coast with devastating flooding and hurricane-force winds. One of the hardest hit areas so far is New Bern, North Carolina. https://t.co/Zc6AE8rKCP pic.twitter.com/4OL4jGHKNr

After Luis had spent days into saving lives and making sure complete strangers were safe, he returned home. Sadly, Ocampo’s homecoming was not a happy one. His home in Charlotte had been ransacked while he was helping people. The back door was open and his dog was running around in the yard. His home was looted and the criminals took his laptop which had all of his school work, a television, a game console, a gun, jewelry, two jars full of change, a box of coins Ocampo’s grandmother had collected from around the world, and they even stole food from his refrigerator.

Ocampo’s girlfriend, Kailey Finch, and their infant son stayed with Ocampo’s parents because she “felt safer there.” “Someone came in through our son’s bedroom window,” Finch said. “They busted the locks with a shovel and propped open the window. The house was trashed.” At first, Kailey reached out to friends on Facebook to see if she could find any information on the burglary.

The Facebook post gathered no leads but a friend of the couple, Mary Elise Capron, saw the post and started a fundraiser. She set up a GoFundMe campaign so the couple could get back on their feet. “I have worked closely with Ocampo in the National Guard and he is an amazing soldier and person,” Capron wrote on the GoFundMe page. “I am honored to know him and cannot believe something so terrible could happen to someone so dedicated to the service, his family and school.”

The GoFundMe page had a goal of $5,000 to replace what was stolen from them. Within 11 days, the crowd-sourcing campaign had raised triple that. The couple and their young son had raised $14,947, much more money than what they asked for or needed. Instead of keeping the free money like most people would do, the couple decided to donate the donated money to charity.

“We got more than we expected, and felt that it was our responsibility to show someone that same kindness that so many showed us,” the very noble Ocampo told PEOPLE. The 24-year-old soldier said that he didn’t want to “abuse people’s generosity” by keeping all of the money that was raised. “Other people really need help that they can’t get.” A true bro legend.

The couple are donating the extra donation money to help a soldier who was left homeless after the storm caused a tree to fall on his house. They are also donating to the Soldiers and Airmen Assistance Fund (SAAF), a non-profit charitable organization that gives grants to soldiers in need. If you’d like to donate to the SAAF charity you can do so HERE.

“A big part of wanting to give the donations comes from seeing how generous people have been, and I wanted to pay that back to someone else who needed help,” Ocampo said.