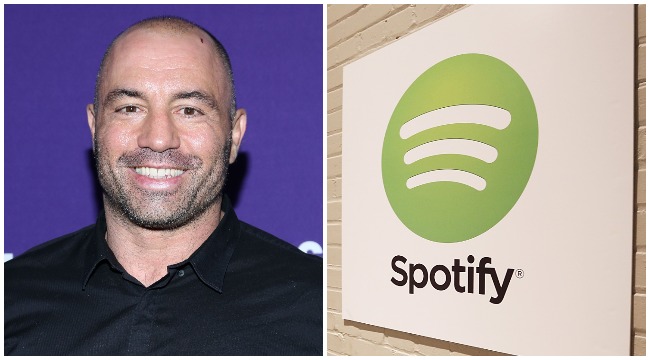 In May, Joe Rogan announced his nine-figure deal with Spotify, claiming it’s just a “licensing deal” and Spotify “won’t have any creative control over the show.”

Sure, I remember thinking to myself, shuffling through the rolodex of companies who have bent the knee to the Mad Online. This seemed idealistic then and it seems idealistic now, seeing as Rogan has become the target of the mob weekly at this point for his platforming of people who have ideas that aren’t Dinner Party Appropriate.

A recent piece by Vice documents a Spotify all-hands company meeting earlier this month in which Spotify CEO Daniel Ek defended keeping controversial episodes of JRE on the platform after some staff inside the company felt “alienated.”

Ek claimed that he held a total of 10 meetings with various groups and individuals about their concerns, which primarily centered around Rogan’s July interview with Abigail Shrier, author of the book Irreversible Damage: The Transgender Craze Seducing Our Daughters, in which Rogan and Shrier dub the trans movement a “social contagion.”

The woke can't find *any* factual errors or bigotry – so they try to ensure you never hear about my book at all.https://t.co/97ACki0j2C

One of the submitted questions was “Many LGBTQAI+/ally Spotifiers feel unwelcome and alienated because of leadership’s response in JRE conversations. What is your message to those employees?” Another was “Why has Spotify chosen to ignore Spectrum ERG’s guidance about transphobic content in the JRE catalog?,” referring to a group of Spotify workers who focus on related issues.

“And Joe Rogan and the episode in question have been reviewed extensively. The fact that we aren’t changing our position doesn’t mean we aren’t listening. It just means we made a different judgment call.”

Even if Ek is disgusted by Rogan’s validation of controversial guests, playing judge, jury and executioner is a slippery slope for a platform that is making the move into podcasting. Traditional social platforms like Facebook and Twitter have learned that the content moderation game is impossible to win when the goal posts are always moving.