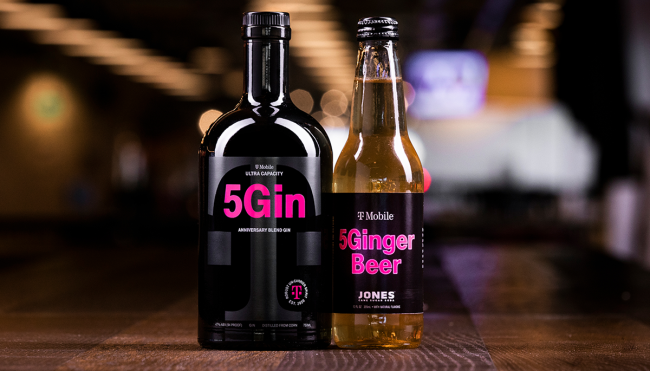 As someone who’s made a living writing dumb things about dumb stuff on the internet for over a decade, I can’t even begin to count the number of marketing stunts I’ve stumbled upon that elicit the same reaction Ryan Reynolds had in the operating room in Harold & Kumar Go to White Castle.

The actor got in on the action himself last summer when he launched a streaming service that featured the largely forgotten heist film Foolproof and literally nothing else, which made about as much sense as Dorito’s launching a Mountain Dew flavor and KFC teaming up with Crocs for clogs that smell like fried chicken.

Now, T-Mobile has decided to get in on the nonsensical marketing game with the release of a new product no one really asked for but that the world is getting regardless: a limited-edition gin.

On Wednesday, the wireless carrier revealed it was commemorating the expansion of a 5G network that now covers over 300 million people in the United States with “5Gin,” a bottle of “ultra capacity” gin that it’s selling for $30 a fifth (it also teamed up with Jones Soda for a “5Ginger Beer” if you’re looking for a booze-free way to celebrate the occasion).

T-Mobile collaborated with Heritage Distilling Company to create a gin boasting “the distinctive combination of 3 botanicals and field-to-flask distillation process.” If you’re already convinced 5Gin is T-Mobile’s attempt to find an ideal delivery vehicle for brain-controlling microchips, I probably can’t change your mind, but there aren’t really any other factors that set it apart from the rest of a crowded pack.

With that said, I wasn’t going to miss out on the chance to give it a try after the folks at T-Mobile offered to send a bottle of the gin my way. While I still don’t entirely understand why 5Gin exists in the first place, I have to give credit where credit is due to the company, because it’s actually pretty damn good.

5Gin has a slightly piney and decidedly spicy aroma that’s reflected in the notes of pepper and citrus that come to the forefront when you take a sip, and while it packs a punch at 94 proof, it’s not overwhelmingly boozy on its own. It also serves as a fantastic base for the martini and gin rickey I whipped up with it, and I could actually see this becoming a staple on my bar when you take the price point into consideration.

However, you don’t have to take my word for it, so if you want to give it a try yourself, you can attempt to get your hands on a bottle when they officially drop at noon on Thursday.